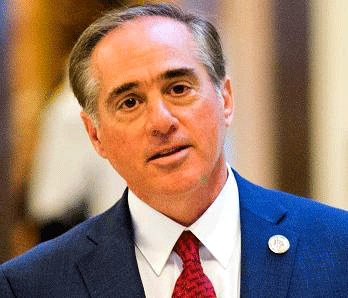 The Honorable David J. Shulkin, M.D., was the ninth Secretary of the U.S. Department of Veterans Affairs, nominated by President Trump and confirmed in the U.S. Senate by a vote of 100-0. Dr. Shulkin previously served as Under Secretary for Health, where he represented 21 million American veterans and was responsible for the nation’s largest integrated health care system.

Dr. Shulkin has held academic positions including the Chairman of Medicine and Vice Dean at Drexel University School of Medicine.

As an entrepreneur, Dr. Shulkin founded and served as the Chairman and CEO of DoctorQuality, one of the first consumer orientated sources of information for quality and safety in healthcare.

Dr. Shulkin is a board-certified internist, a fellow of the American College of Physicians. He received his medical degree from the Medical College of Pennsylvania, his internship at Yale University School of Medicine, and a residency and Fellowship in General Medicine at the University of Pittsburgh Presbyterian Medical Center. He received advanced training in outcomes research and economics as a Robert Wood Johnson Foundation Clinical Scholar at the University of Pennsylvania.