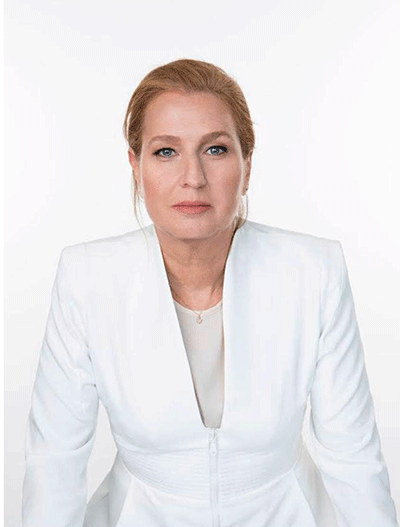 In addition to many years of service in Israel’s Parliament, the Knesset, Livni has served as Acting Prime Minister, Foreign Minister, and Minister of Justice, among other key posts. She was also the head of several centrist political parties. In addition to her other roles and responsibilities, Livni was Israel’s chief negotiator in the search for a resolution of  the Israeli-Palestinian conflict, and the Head of the Opposition in the current Knesset.

A lawyer by training, Livni was in private legal practice for 10 years before entering the Knesset in 1999. She also spent four years working at Israel’s intelligence agency, the Mossad, and served in Israel’s army, completing her service as a lieutenant.

Livni was a key decision maker during all of the most important political, military, and intelligence events during her years in senior Cabinet posts, including the Gaza disengagement, the 2006 Lebanon War, the strike against Syria’s nuclear reactor in 2008 and Operation Cast Lead.

Tzipi Livni provides an insider’s account of Israel’s defining moments in the 21st century and a compelling vision for its future.