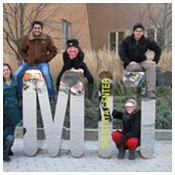 What happens when you bring together students from top technology universities in Boston and in Haifa, Israel? Ideas are sparked. Connections are made. Ethical issues bubble to the surface. Community service projects are launched.

The end result is that students from both the Massachusetts Institute of Technology and Technion have formed close personal connections through ‘ConnecTech,’ a program supported in part by CJP’s Boston-Haifa Connection. Participants say these person-to-person bonds are the key to making strong, lasting connections between our Jewish communities.

“I really enjoyed the technical side of the program, but what influenced me the most was to see and feel how warm and inviting the Jewish community was,” says Yael, a student at Technion who visited Boston for a week in December 2012 as part of a ConnecTech delegation.

During that week, MIT Hillel students played host to their Haifa Hillel counterparts, ushering them through the city to diverse destinations that included visits to high tech start-up companies, science labs and even a stop at the Cambridge Soup Kitchen for a community service project. Along the way, they met MIT alumni business leaders at companies including ITA/Google, Akamai and Fire Hose Games.

While the networking opportunities were exciting, both Boston and Haifa students say they were surprised by how their views of Judaism and their own Jewish identity expanded.

“ConnecTech has been a great opportunity to significantly broaden my personal horizons,” says Dave, a MIT grad student who traveled to Haifa through the program. “It provided another view on Jewish identity that I think is not readily available to someone who has grown up entirely in the United States.”