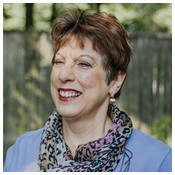 Growing up in an interfaith home and having spent time with her Jewish grandparents, Laurie was familiar with Jewish traditions. However, as an adult, she became more and more curious about how Judaism could help shape her own beliefs. An Intro to Judaism class helped her dig deeper, ask questions and explore her personal connection to Judaism.

“One of the great benefits from this adventure was the friendships that formed,” says Laurie. After her class ended, she and a few others from the group began a Torah study group and continued to socialize together.

Intro to Judaism, a program of Reform Jewish Outreach Boston (RJOB), is just one of the many resources that you make possible with your support to CJP. Last year, more than 1,674 people participated in a variety of interfaith programs supported by CJP, including Jewish education classes, social events, holiday workshops and more. While the programs and resources are geared toward interfaith families, they are open to anyone who is interested in learning more.

“Every person’s story is so beautiful and individual,” says Joyce Schwartz, the Director of Outreach & Ambassador Programs for RJOB. "It’s really rewarding to be able to be a resource for them."

Newlyweds Sam and Rachel are graduates of another RJOB class, Yours, Mine and Ours, which offers interfaith couples a supportive environment to discuss their religious identities and helps them make choices about their lives together. “We met other interfaith couples in various stages of life (engaged, newly married, married with a baby on the way) that made us realize we weren’t alone,” said Sam. “We learned that we could compromise without sacrificing our individuality, and that all of our differences—including our religious backgrounds—weren’t a barrier to taking the next steps in our relationship.”

Sam went on to take Intro to Judaism, which he says helped renew his faith. “[It] made me want to participate more fully in elements of Judaism that had fallen by the wayside long ago: Shabbat dinners, speaking and reading Hebrew, and Temple services.”

Joyce says that what many RJOB students are ultimately looking for is community, which is where CJP’s contribution is even more meaningful.

“CJP is supporting the big picture of Jewish engagement–everything from social action, music, education–all of that is under the umbrella of CJP. We need all of that as part of a healthy, vibrant community.”