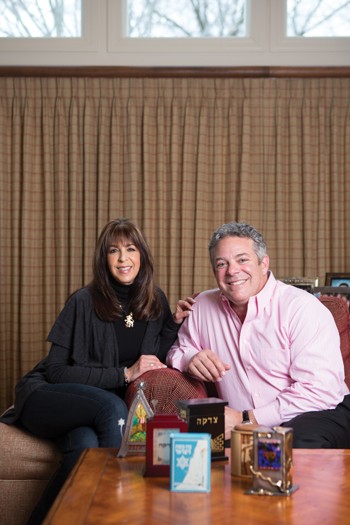 A Legacy of Love for Israel

Larry and Penny Goodman work together to build stronger families at home in Boston and in Israel. It’s a tradition that goes back more than 65 years in their family

In their living room, Larry and Penny Goodman display a collection of antique tzedakah boxes for charitable contributions to synagogues, Hebrew schools and other organizations. The collection reaches back generations—the same as the Goodman family’s commitment to Israel.

“My grandfather went to pre-state Israel in 1947 and met with David Ben-Gurion. He was so moved that when he came back, he took a year off of work. All he did was raise money for the future state of Israel,” Larry said.

Today, Larry and Penny continue the tradition through their generosity and tireless volunteer work with
CJP and on behalf of Israel. Larry chairs the Israel & Oversees Commission; Penny serves as president of Women’s Philanthropy.

For Larry, helping to lead CJP’s Boston-Haifa Connection’s evolution into a powerful and well-known bridge between people and cultures has been particularly rewarding. Seeing the brave young IDF soldiers
speak to local groups during the annual Hatikvah Officers Mission is “tremendously moving” he said. It’s a
moment his grandfather would be proud of as well. 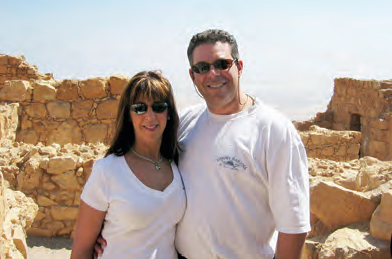 The family connection also runs deep in Penny. When Penny speaks to CJP audiences, she wears a pair
of her mother-in-law Sandy’s earrings, a reminder of the woman who sparked her own commitment to
Federation. And she was thinking of Sandy when she went to Israel with the Women’s Philanthropy Mission this spring. They visited Parents at the Center to see the improvements now underway at the facility, thanks in part to the Women’s Philanthropy “Elevate Your Passion” initiative. They also participated in a service project and checked in on the construction of a playground and the building renovations.

“When you see the difference we can make, it hits home,” Penny said. “It’s why we do what we do.”