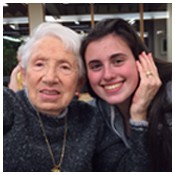 For a lot of people, there’s nothing too special about Tuesday night. But for a group of teens in the South Area, Tuesday is the night when they visit their friends at the Simon C. Fireman Community senior housing complex in Randolph. As part of the TELEM regional collaborative, a program of the Jewish Community Relations Council of Greater Boston (JCRC), held at Temple Beth Emunah in Brockton, they are learning what it means to be part of a caring community.

“My favorite experience while participating in TELEM has been getting to know Rose, a resident at the Fireman Community,” says Zoe. “Through TELEM I have learned the importance of mitzvot, and how spending a few hours each week helping out means the world to some people.”

According to Jared, another TELEM participant, he gets as much from the program as he gives.
“I’ve learned so much from the people I meet there. One senior told me about his career making dentures, and it was obvious he had so much pride in his work. I learned you don’t have to have a high paying job or a fancy lifestyle to be happy. All you need is to do something you love and have fun with it.”

Generations Connect to Each Other

According to their teacher, Barbara Fine, both teens and seniors have had a ‘magical’ time. Whether they are playing Scrabble, sharing prom dress pictures, or simply talking, the connections they make with each other and members of the community are pretty special.

“Some of our students aren’t affiliated with the Temple, but they want to be a part of TELEM,” says Barbara. “They start out in 8th grade, and they stick with it throughout high school. We don’t lose anybody—these kids want to be here.”

Marjorie Glincher sees TELEM from another point of view. As the Executive Director of the Fireman Community, she was initially concerned that the residents would need a planned activity or agenda to entice them to attend.

“As it evolved, I realized all they needed was just to spend time with the students. The true relationships that have formed between the teens and the seniors are the most rewarding parts of the program. I believe that the students come away with a much better understanding of aging than they had before.”

Your Support Makes a Difference

From paying for the van that brings the kids to the Fireman Community, to providing the curriculum and supporting the professionals who coordinate TELEM, support from CJP really makes a difference.

“They give us everything we need—the brochures, the networking, the marketing,” says Barbara. “Without CJP’s support, this just wouldn’t happen, and that would be such a loss for our community.”