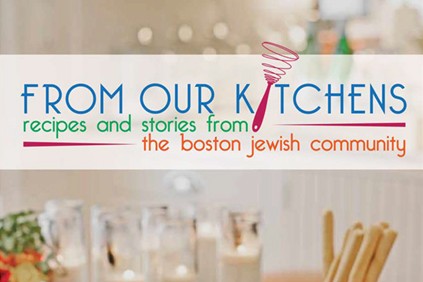 It’s been a labor of love that has involved 150 women and countless hours, recipes, photos, and dishes. But after three years, From Our Kitchens: Recipes and Stories from the Boston Jewish Community, is almost here! The Women’s Philanthropy cookbook will officially debut at the Annual WP Kickoff event on Thursday, October 11 at Temple Beth Elohim.

In advance of the launch, we sat down with the four women at the helm of the cookbook — Editor-in-Chief Laure Garnick and Senior Editors Jackie Finard-Hughes, Jordana Glasgow, and Karen Philip — to learn more about this exciting culinary project.

WP: What inspired you to want to create From Our Kitchens?

EDITORS: Our inspiration for the cookbook came from the Montreal Jewish community, which had published their own cookbook. When Laure heard about Montreal’s cookbook through her sister, she knew she wanted to bring the same exciting community-building project to Boston and CJP. Our goal was to enlarge the circle of women involved with CJP and bring everyone together in a meaningful, hands-on way. The essence of this project is really about the value of community.

WP: How did you organize so many women to contribute to the cookbook? What were the various roles in which the women could serve?

EDITORS: We spent a lot of time at the outset figuring out how best to organize this expansive project. It was important to us to empower as many women as possible by giving them leadership roles and responsibilities. Each of the 12 chapters had "Top Chefs" who oversaw their own test kitchens with groups of women they recruited.

We had executive chefs who tested recipes, photographers who attended each cooking session, writers who contributed stories and quotes, and now a whole marketing and sales team. We also had a secret weapon: a professional organizer who volunteered her time to keep us on track!

WP: What are some of your favorite recipes and why?

EDITORS: There are too many to list! We each have our favorites, but the beauty of this cookbook is that there is something for everyone, every season, and every occasion. We have traditional dishes like kugels and brisket with interesting, modern twists along with Sephardic recipes from Egypt and Lebanon. This cookbook has so much — creative salads, summer BBQ dishes, soups and stews, delicious sides, easy snacks, Shabbat specialties (including five different challahs!), fruity desserts, and even some fun cocktails. Okay, if we had to pick a favorite… how about the Whipped Feta Dip with Marsala Figs and Pistachios?

WP: What do you hope this cookbook will bring to the women of Greater Boston’s Jewish community and beyond?

EDITORS: We hope that this process has created an enduring sense of community and sisterhood and that bonds us to each other, CJP, and our community. We also want this cookbook to capture — in a lasting way — the story of the Boston Jewish community as told by the foods we make, the holidays we celebrate, and the stories we tell. Of course, we also hope this project will inspire a lot of special meals with family and friends for years to come.