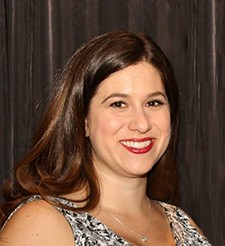 Back in the day, Jessica Myers was brought to a Jaffa Society event by past Society head Lori Sidman. Jaffa bridged the gap between YLD and the Women’s Division, providing the opportunity for women in their 20s and 30s to participate in events. She loved attending and meeting other women in her same life phase—and who wanted to get involved in Boston’s Jewish life in an organized way—and eventually she began taking on larger leadership roles.

When the Jaffa Society and the Families with Young Children group merged to form the Young Women’s division of Women’s Philanthropy, Jessica was automatically included in the WP Executive Board.

Since then, Jessica has continued to be involved as a leader in Women’s Philanthropy. She currently serves on the Executive Board as co-chair of Leadership Development. When the idea of running this program first emerged, she instantly knew this was exactly the opportunity she’d been looking for.

“The Leadership Development Series speaks to me on many levels,” Jessica says. “I enjoy working with smaller groups of women in a facilitator/teacher role.” Through this experience, she began to see herself as a connector, and views the series as an opportunity to, “bring people who were already involved into bigger roles.” Through this program, she’s paved the way for new leaders to access their potential. “Women’s Philanthropy has evolved into a great place over the last decade…and my favorite part is the women I meet!”