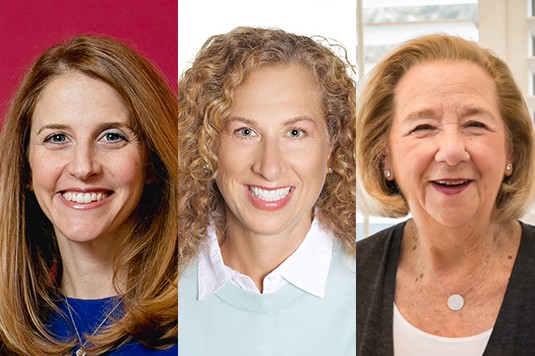 It truly takes Wonder Women to plan our annual Lion of Judah Luncheon and 2018 Co-chairs Helene Gelber, Laura Olton, and Phyllis Sagan have done an incredible job! Learn more about the three women behind our signature luncheon and their roads to leadership within Women’s Philanthropy.

Helene Gelber began her journey with CJP when she joined the professional team after graduating from college. Her first introduction with Women’s Philanthropy occurred when she staffed a CJP Women’s trip to Israel. This trip made Helene feel particularly moved by the comradery between the women, some spanning generations, and all inspired and empowered to make a difference in the world.

Since working at CJP, Helene has become involved as a leader at Temple Beth Elohim, The Rashi School, and within Women’s Philanthropy, serving on the WP Executive Board, on a past Lion of Judah event committee, and as co-chair of the 2017 Annual Kickoff Event.

“Being a Lion of Judah gives me a very special way to connect with dynamic women from all parts of the world who contribute their time and resources,” says Helene. “For me, it’s also about honoring a tradition of women’s giving.”

Laura Olton became involved with Women’s Philanthropy after her first CJP mission to Israel in 2014 and participating in CJP’s Acharai program the following year. She began serving on the Commission on Caring and Social Justice after seeing CJP’s extensive impact locally and in Israel.

For Laura, the Lion of Judah society is important because it allows Jewish women to take ownership of their personal investment in the future of our Jewish community.

“It’s a sisterhood of like-minded women who want to make the world a better place for the Jewish people,” she says. “Being a Lion commands a sense of pride and inspiration for doing even more, together.”

Although she’s been involved with Women’s Philanthropy for less than five years, Laura says it feels like a community she’s been a part of forever.

“There are a variety of events and ways to participate, so you can give a little or a lot of your time — there’s no judgment,” Laura says. “And if there’s an opportunity to go on a WP mission, go for it! It’ll be an incredibly meaningful, fun journey with a tribe of amazing, thoughtful women.”

Phyllis Sagan, a longtime leader on the North Shore, has held many roles within CJP and Women’s Philanthropy over the years. She was a key player in the 2013 merger, helping to build bridges between CJP and the North Shore.

A tireless ambassador for our work, Phyllis is passionate about women joining the Lion of Judah society.

“I have always felt that as independent women, we have to speak up,” she says. “It is imperative for every woman to participate. If you can do it, you should do it.”

As she continues to attend and lead events, Phyllis says she is encouraged by the number of new faces — and young faces — that she sees.

“I am always working to bring in more women, to see firsthand the important work of CJP,” she says.

Her message to new women: Get involved and stay involved.

“It is really important for everyone to do something, to give something, and to show up,” Phyllis says. “We are all part of the community; we all benefit.”