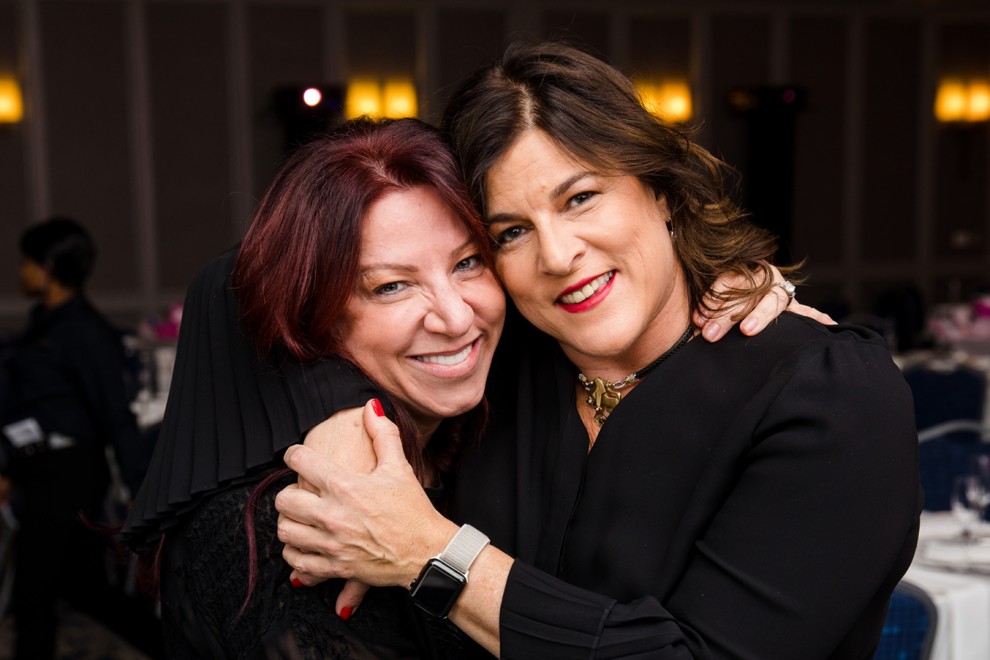 For the past three years, Judith T. Sydney and Rachel Chafetz have been leading Women’s Philanthropy as President and Campaign Chair, respectively. Thanks to their hard work, dedication, passion, and humor, Women’s Philanthropy has evolved into a group that’s inclusive of all women and effecting change on many levels.

As their terms end, we offer a giant mazel tov and thank you to Jude and Rachel for their dynamic leadership. They are true Wonder Women, and we hope you’ll read on to learn more about what drives their commitment to WP, CJP, and the Jewish community.

Not only did she meet her wife, Aviva Sapers, but the experience was also the stepping stone for all her future involvement with CJP.

“Missions are magical,” she says. “That was the beginning for me of my leadership journey and my desire to jump in and make a difference.”

Upon her return to Boston, Jude joined CJP’s Young Leadership Board, became involved in the Real Estate Construction and Design group, and sat on the National Young Leadership Cabinet, which gave her a glimpse into the broader federation system.

In 2011-2012, she participated in The Cynthia and Leon Shulman Acharai Leadership Program; from there, Jude co-chaired WP's Annual Pomegranate Society event and eventually served as President of Women’s Philanthropy.

Jude says the highlight of her term has been “creating a space in WP for all women — wherever they are in their lives — where they can feel connected, empowered, and strong."

She’s also especially proud of WP’s push toward cohort-based learning, strengthening relationships with women from all demographic regions of the Boston community, and new programming for young working women and professional business women. In addition, Jude has worked closely to deepen connections with corporate sponsors whose financial support has been integral to expanding the reach of Women’s Philanthropy.

To Jude, Women’s Philanthropy is all about celebrating our power to make a better world together.

“People have an inner desire to feel a part of something larger than themselves,” she says. “Through Women’s Philanthropy, that happens. We create those relationships, those partnerships, and those friendships.”

To those new to WP, Jude says, “Come and be part of a sisterhood that will empower you to help change the world around us and script an even bolder future for ourselves, our families, and our Boston Jewish community.”

When Rachel Chafetz moved from Israel to Boston in 1995, she began to search for community. She knew she was putting down roots to raise a family and wanted to be part of something long-lasting and purposeful.

“CJP was the answer,” she says. She dove in, getting involved in CJP’s Israel work, the Acharai program, missions, and more.

Rachel says she didn’t know much about Women’s Philanthropy, but that quickly changed once Jude Sydney asked her to sign on as WP Campaign Chair.

“It was a great opportunity to learn something new — and I did,” Rachel says. “I fell in love with Women’s Philanthropy. Bringing together a group of women who do so much is incredibly motivating and inspiring.”

Rachel says the best part of her work with WP has been “getting to know the women of this community, and understanding the power, the dedication, the strength, and the care they have for each other and for our collective future.”

She says this especially rang true after the last Jewish Federation of North America’s General Assembly in Israel.

“I had a moment when I realized what we are doing in Boston is so far ahead of most federations, and Women’s Philanthropy is no exception,” she says. “It became clear to me that what we are doing within WP is innovative and really exciting. This was life changing for me. I am so lucky to be part of this work.”

Rachel encourages those new to WP to jump into our vibrant community.

“If you need time to learn, take your time,” she says. “But trust us to be there to help guide you and to show you what we do. And most importantly, believe that you have a strong voice — because you do.”