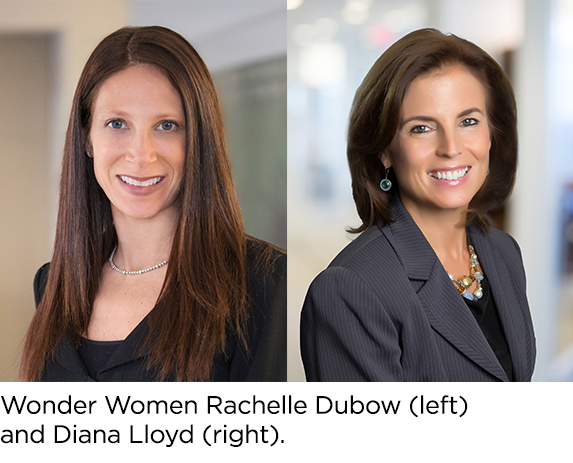 Growing up in Marblehead, Rachelle Dubow was “vaguely aware” of CJP but more focused on the local Jewish Federation of the North Shore. After the organizations merged in 2013, she “stood up and took notice” — and decided to get involved in CJP, personally and professionally, through the Lawyers & Accountants Annual Reception.

“The more I learned about CJP, the more I wanted to be part of it,” Rachelle says. “And the more I involved myself, the more CJP reached out to me to be involved. It was a very symbiotic relationship.”

But it was after participating in a North Shore Leadership Series and hearing from Rabbi Marc Baker (then head of Gann Academy) that Rachelle had her “a-ha” moment. Marc encouraged participants to find something that was missing in their community and figure out a way to bridge the gap. For Rachelle, that was Women Business Leaders.

She then reached out to fellow attorney Diana Lloyd to ask if she was interested in co-chairing an effort to convene C-suite and executive-level professional women at convenient times and locations in Boston to network and learn more about getting involved with CJP. Diana was in — and Women Business Leaders was born.

“My favorite part of the work we are doing is making connections with other amazing, smart, successful women who share a desire for networking, a deep interest in being an active participant in our Jewish community, and a strong commitment to the Jewish future,” Rachelle says. “Through Women Business Leaders, I have met women I might never have otherwise crossed paths with at a CJP or Women’s Philanthropy event, and have been able to form personal and professional relationships.”

At the end of the day, Rachelle says community gives her strength and purpose.

“It’s important to be a part of a strong community of philanthropic women who want to repair the world,” she says. “We are empathetic, we are smart, we are professionally successful, and we are motivated to make this world a better place for our children and grandchildren. In short, we get things done. There’s a saying I use frequently — if you want to get something done, ask a busy person to do it.”

Diana Lloyd’s first taste of CJP was in the mid-90s through the Lawyers & Accountants Annual Reception. At the time, she was new to Boston and new to Judaism.

Little did she know that event would mark the start of her CJP leadership journey.

“As I became more connected with the Jewish community — mostly because my children went to Jewish days schools through high school — I became more interested in getting more involved,” she says. “I participated in CJP’s Acharai Leadership Program, which was amazing, and deepened my connection to CJP’s work and impact.”

But, Diana’s busy career as a Boston attorney specializing in internal investigations and white-collar defense made it challenging for her to consistently stay involved. When Rachelle Dubow approached her with the idea of co-chairing the Women Business Leaders group, Diana was immediately intrigued.

“As a working mother with a career in Boston, I really wanted to develop a network of like-minded women, and the notion of building such a community with a Jewish focus was highly appealing to me,” she says. “I have enjoyed the process of building this community through before-and-after work networking, educational, and socializing opportunities. I look forward to seeing where we can take this group.”

In 2018, Diana participated in a CJP Executive Women’s Mission to Israel led by Elizabeth Jick and Shira Goodman that she describes as “truly transformative.” That experience shaped her leadership within Women’s Philanthropy and how she thinks working women can “form connections and make a positive impact in a way that works best for us.”

One of those ways in the coming year will be a hands-on service opportunity. Members of the Women Business Leaders group will assist clients at JVS with job readiness skills.

“As professional women, we are thrilled to use our skills and experience to give back to those in need,” Diana says. “We are excited to be adding this type of event to our programming as another way to build community and connection.”