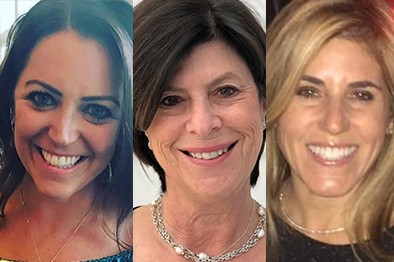 It takes Wonder Women to coordinate our Annual Pomegranate Society & Friends Event, and 2019 Co-chairs Samantha Bartfield, Jacquelyn Furman, and Jennifer Lourie have truly stepped up to the task.

Learn more about the three women behind the amazing evening and their roads to leadership within Women’s Philanthropy.

Having grown up in a tight-knit Jewish community in New Jersey, Samantha Bartfield says she was seeking the same when she moved to Boston. She got involved with Temple Beth Elohim but continued to look for something more. Friends introduced her to CJP — and Women’s Philanthropy — and she was immediately inspired.

“After the first CJP event I attended, I felt like I was a part of something bigger,” she says. “As a child, my parents were extremely involved in our temple and other Jewish organizations, and were always trying to change the world. I think about that often as I teach my own children, in the spirit of Tikvah L'Atid or ‘hope for the future.’ CJP and WP provide me with so many ways I can pass on a sense of responsibility to lead our lives with commitment and meaning.”

Samantha says she is passionate about her involvement with WP because it gives her a chance to become “an active up-stander rather than by being a side-line bystander.”

“Each and every day as a Jewish woman, especially now, I realize how important it is to find meaning in what you do and how you live your life,” she says.

Samantha encourages all women who are looking for something bigger to join Women’s Philanthropy and attend events.

“Everyone deserves to have a supportive community and not be intimated to take the first step to discover ways to touch as many lives as they can and make a change,” she says. “There is something for everyone at CJP, whether it is helping out one day, or involvement over a month, a mission, or years of work. Everything makes a difference in the lives of others.”

Jacquelyn Furman got her first taste of CJP in 1992, when she and her husband, Howard, participated in a mission to Israel. Since then, she has traveled with CJP on WP missions to Israel, Prague, and Budapest, as well as on a couples’ mission to Cuba, the birthplace of her mother.

Jacquelyn says she is grateful to have had the chance to be part of a community of people who want to make a difference in the lives of so many — here in Greater Boston, in Israel, and abroad.

“Every fiber of my being is linked to the connections I have made with CJP and Women’s Philanthropy,” she says. “Because of these connections to the Jewish community, I have grown to be the woman I am today. They’ve helped me understand how I want to live my life, and how to raise my children. Every mission, every learning opportunity, every social action program I’ve joined, and every chance I’ve had to see the work we support has enriched and touched my life in unspeakable ways.”

Jacquelyn says her wish for women new to WP is that they take a chance — a chance to see how being part of our community of women can be “a true life-changer.”

“Just take one step at a time or dive right in,” she says. “Whatever you do, you will be so glad you did. I am forever stronger and grateful because I did.”

Jennifer Lourie became involved in CJP as a young adult because it provided a platform for her voice to be heard as she worked to effect change in the community — and beyond. More than 15 years later, she’s still committed to the organization, finding her place within Women’s Philanthropy.

“It’s an incredible thing when you feel like you are in the position to make an impact,” she says. “And as the mother of two young women, 17 and 20, it is very important for me to help them understand what it means to contribute and to give back — while perhaps inspiring others to do the same.”

Jennifer says she is honored and humbled to serve Women’s Philanthropy as a POM co-chair.

“This amazing group of women’s sole focus is to make the world a better place,” she says. “I can’t imagine anything more rewarding than to be a part of that objective.”

To women new to WP, she says simply: “Jump in!”

“We will welcome you, listen to your ideas, embrace your passion, and work to help you accomplish whatever philanthropic goals you’ve set,” Jennifer says. “You can choose to be involved in so many ways.”