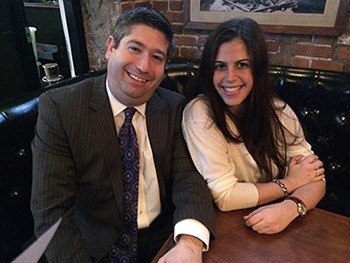 This month’s Cool YLDers are Jason Potts and Jessica Adler, this year’s chairs of TribeFest, a national conference for Jewish young leaders.

How long have you all been a part of YLD and how did you get involved?
Jessica: I've been a part of YLD for about 3 years. After going on the Israel Mission in 2012, I decided I wanted to get more involved, so I did Kadimah and now I'm on the YLD Board, co-chairing TribeFest 2014!!
Jason: I signed up for Kadimah in 2011 after a friend recommended the program. I joined the YLD Board in 2012. I went on the Mission to Israel during the summer of 2013 and I am co-chairing the Boston delegation to TribeFest 2014!

How would you like to leave your footprint on YLD?
Jessica: I’d love if people remembered me as someone who just wanted to have fun and as a result, made everyone else enjoy their time in YLD!
Jason: I would like to help ensure that every young Jewish adult in Boston has the opportunity to be a part of our wonderful community and to experience whatever social, cultural or religious elements are important to them.

Tell us three fun (Jewish) facts about yourself.
Jessica:
1. I went to Jewish private school until middle school.
2. I love to cook and usually do most of the cooking for the high holidays for my family!
3. I'm going to New Orleans in March with my co-chair Jason for TribeFest! Come with us!
Jason:
1. I taught my my non-Jewish goddaughter how to pronounce my Hebrew name (shout out to Emma Loveland!).
2. I went to Israel for the first time as part of the CJP Young Leaders Mission. It was an amazing experience--I recommend it to all!
3. I’m going to celebrate Purim and St. Patrick’s Day in New Orleans as part of TribeFest 2014!

If you could have dinner with one Jewish person (living or dead) who would it be and why?
Jessica: I would love to have dinner with Zac Posen! If you know me, you know I LOVE fashion and I think he's absolutely brilliant. I would love to pick his brain and make him love me and make me dresses :)
Jason: Barry Shrage – to run any business or organization for 25 years is quite a feat, let alone a major Jewish Federation!  His experiences and stories would make for quite an enlightening and fun evening.