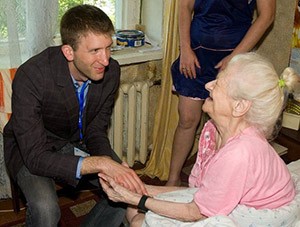 How long have you all been a part of CJP and how did you get involved?

I have been involved with CJP as a young adult since 2009, most recently (and most significantly) with the Boston-Haifa Connection, where I co-chair the Young Leadership Committee along with two very bright and committed chairpersons in Haifa, Israel.

I found my niche in Boston-Haifa after spending time studying Israeli law at Haifa University in 2009. After that, I was compelled to develop programs that address common needs of young professionals there, including the availability of work and career opportunities.

My first entrée into young adult programming in Boston was LEADS, which I did in the spring of 2009. LEADS was a good opportunity for me to meet others in our community and to connect with Jewish life in Boston, which was something I was really looking for during law school.

By far, my favorite young adult events are those that offer Bostonians a connection to Israel, particularly on a person-to-person level. For example, I always get very excited to be a part of young adult opportunities to connect with the Hatikvah Officers Mission, which brings IDF officers from Haifa to Boston every spring. I also really like our annual Blue and White party, which celebrate Israel’s Independence Day and which the Boston-Haifa Connection co-sponsors.

Also, my committee annually brings young professionals from Haifa to Boston, and we run a variety of social and substantive events. Events like those give me a great sense of pride to be a part of a global Jewish community that gets closer with each passing year.

How would you like to leave your footprint on the young adult community?

I am focused very specifically on a vision of connecting Boston’s young adult Jewish community with young adults in Haifa. In my mind, there is nothing more important to our community than strengthening personal connections between these groups because of the mutual impact it has on our Jewish identity.

The fact is, the Jewish communities in Israel and the Diaspora have evolved largely separately for thousands of years, though we have all remained committed to our common core of Jewish beliefs and teachings. Nowadays, we can transform our understanding of ourselves and of one another when we leverage our relatively recent ability to connect deeply, frequently, and consistently with our peers in Israel.

We are creating a close-knit, global, Jewish community, and there really have not been a lot of opportunities to do that since the Second Temple was destroyed. The programs that are doing this now are going to have a profound impact on our future as a Jewish people, and I am grateful that I live in a time when I can be a part of that.

Growing up, I always loved observing the High Holidays with my family and with my synagogue. I always recognized the excitement that came along with starting a new year, thinking about my proud moments and my regrets, and taking a fresh pass at all of the stories placed around our Jewish calendar. Of course, it helped that my family and my community created age-appropriate experiences to help me understand these very grown-up concepts!

If you could have dinner with one Jewish person (living or dead) who would it be and why?

There are so many choices, from antiquity to modernity, which, itself, is a testament to the accomplishments of the Jewish people. At this moment, I would choose to dine with Albert Einstein, and I would spend the dinner exploring his personal reconciliation of science and faith. Though we may finish dinner in one evening, I suspect I could spend a lifetime digesting the wisdom he might impart.