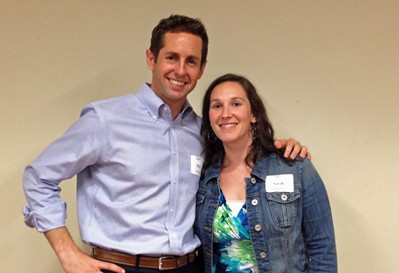 Together, they co-chair Hands-on-Philanthropy and Yom Sport and are members of the YLD Board.


How long have you all been a part of YLD and how did you get involved?

Sarah: I got involved in YLD after returning from CJP’s first-ever Boston Young Professional Birthright trip in 2008. I was later invited to participate in the Birthright Alumni Engagement Committee through Gesher City, and the rest is history.

Phil: I've been a part of YLD since the fall of 2010 - that fall I participated in LEADS and the following spring I ran the Boston Marathon with Team CJP. As a newcomer to Boston, LEADS was the perfect intro to CJP and the Jewish young adult community.

Sarah: Oy vey, I can’t remember!  After Birthright, it was either the first Birthright Alumni Kickball game (Go Team Iris – League Champs) or the Sneak Peak event at the Hard Rock Café in Faneuil Hall.

It’s hard to pick one favorite event, but the 2010 Mission to Israel was an incredible trip where I made lifetime friends and strengthened my connection to Israel. This particular visit to Israel really cemented my involvement with the Boston (and overseas) Jewish community.

Phil: First event was the Open House Party in 2010. This is where I got signed up for LEADS and figured out who to bug for a marathon jersey. Favorite event was probably the Chai Society Evening with Doug Elin (the creator of Entourage) last fall. I'm a long-time fan of Entourage, so it was really interesting to learn how the show came about, and the impact of Judaism on Doug's life and career in Hollywood.


How would you like to leave your footprint on YLD?

Sarah: Tikkun olam (repairing the world) is close to my heart. In addition to providing monetary support, I feel that volunteering time can also have a big impact. This year, I’ve been enjoying the volunteer opportunities made available through the Hands-On Philanthropy (HOP) Program. As a “HOP” co-chair and volunteer, I’ve been given many opportunities to step outside of my comfort zone, meet new people and give back to the community in a meaningful way.

Through activities such as sharing a Shabbat meal with adults with disabilities at JF&CS or packing boxes for Shabbat of the Month Club participants so that families may build memories and traditions together, I’ve grown personally and developed a stronger connection to the community. My hope is that HOP participants see firsthand how a little bit of their time can make a bigger difference and that they’re inspired to continue volunteering through HOP or another channel.

Phil: Yom Sport 2013! Did anyone mention that Sarah and I are the YLD co-chairs?


What is your favorite (Jewish) childhood memory?

Sarah: My grandfather always recited the Birkat Habanim over me after each visit.  It was only later in life that I understood what the prayer meant, but it was a quiet moment between the two of us where I felt very connected to my grandfather and extra special (and not just because my name was in the prayer).

Phil: Definitely my bar mitzvah. It happened during the Winter Olympics, so we decided to throw an Olympic-themed party. I wore a wreath and carried a torch to kick off the festivities. It was totally epic.

Sarah:
1. I have a kosher style all my own which I’ve dubbed “Kosher-ish.”
2. If I had known then what I know now, I would have gone to Jewish sleep-away camp. Fortunately, through CJP, I’ve been able to give other children the opportunity to attend camp.
3. I prefer my latkes with applesauce and sour cream.

Phil:
1. I grew up in a Jewish diaspora in East San Diego County.
2.  I just got back from meeting members of the Jewish community in Cuba.
3. I was president of the Jewish Business Association in grad school.


If you could volunteer with one Jewish person (living or dead), who would it be and why?

Sarah: Once upon a time I called my dad to see how his office was surviving a winter flood.  When I asked where my mom was, he explained that while he was knee deep in water, she was off at the local children’s organization seeing what resources they needed and how she could help.  If I could volunteer with one Jewish person it would have to be my mom. She is incredibly selfless and when my mom is not working, she can typically be found organizing the temple’s semi-annual rummage sale, helping a community member in need, or working with other local organizations. I aspire to be like my mom not only because she’s so energetic, but because her happiness comes from giving to others rather than thinking about herself. Fortunately, my dad respects this about her as well!

Phil: I would volunteer with Larry David - he would probably do something awkward and/or offensive, but I know it would make for a very entertaining outing. Nobody says you can't laugh and give back at the same time.