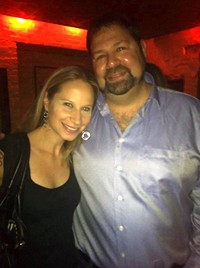 Abby and Marc are the co-chairs of this year’s YLD Summer Mission to Israel, which is on the ground right now. Get to know them better.


How long have you all been a part of YLD and how did you get involved?

Abby: I have been involved with YLD since 2008, when my good friend (Shari Wiener) convinced me to go to some parties with her. I met cool people, heard about all the great things I could get involved in...and FINALLY signed up for the 2009 YLD Summer Mission. When I got home from Israel, I was so inspired to get more involved and I applied for Kadimah....the rest is history! Since then, I have co-chaired the Chai Society, co-chaired LEADS and was part of the JCRC Reach Out! pilot program as a site leader.

Marc: A little over three years ago, I had a friend move up to Boston from Atlanta. He asked if I would introduce him to some of my friends, and more specifically, some of my Jewish friends as he had been active in Atlanta’s Jewish community. I replied that I didn't have a whole lot of Jewish friends, and certainly not a Jewish community, but if he could find one, sign me up and I'd join him. A few weeks later I was signed up for LEADS, and a few months later I headed out on 2010 Israel Mission.

Abby: My first YLD event was CJParty 2008. My favorite YLD event was the Chai event that I co-chaired with Ashleigh Jaffe and Jessica Wayne in 2010. We poured our hearts into that event and had such a great time doing it.

Marc: Aforementioned friend asked me to join him to the CJParty, A Novel Affair. I remember not really knowing anyone, and doing laps around the outside of the party scene. But then we were met by Elisha Gechter, a CJP staff member at the time, who told the two of us that the Israel Mission, in additional to be an amazing experience, would also serve as a "speed pass" into developing a Jewish community. She couldn't have been more accurate, as many of Mission 2010 members remain some of my closest friends still, and I truly believe that I am an active part of one of the best communities I could have hoped for.

How would you like to leave your footprint on YLD?

Abby: As the incoming board chair, one of my main priorities is to keep motivated and talented people involved and active on the YLD board.  I want young leaders to enjoy volunteering their time and donating money to CJP, and to be truly proud of the community that we have built.

Marc: I hope for those YLDers that I have met and shared experiences with, that I leave them with more laughs and wider grins. For the next generation of YLDers, some of whom I will be spending the next 10 days with in Israel, I hope I leave them with the feeling that even if their best friends are outside of YLD, they have an amazing community within YLD that offers a wealth of friendships, and incredible opportunities to make a meaningful difference to the Boston Jewish population (and beyond).

Abby: My favorite Jewish childhood memory is bringing bagels and lox over to my grandparent's house on the weekends.

Marc: I'd love to say Chanukah 1985, but that was the year I received three copies (which is three too many) of Eddie Murphy's Party All The Time album, so that can't be it.

So I'll go with my b'nai mitzvah, the bar mitzvah experience I was able to share that with my twin brother and my mom, who had her bat mitzvah that evening before the party began. Not to mention I won the hula-hoop competition, and was paired with Cari Siegel in "Coca-cola/7-Up." Not too shabby.

Abby:
1.  I loved learning my Haftorah and Torah portions even though I'm a terrible singer.
2.  I've traveled to Israel, Ukraine and Cuba to learn about Jewish communities and tikkun olam (repairing the world) with CJP, the JCRC and the JDC.
3.  All the dogs in our family wear yarmulkes on the High Holidays and Passover (even though they are all girls).

Marc:
1.  I feel gefilte fish is just a vehicle for horse radish, much like lobster is just a vehicle for butter.
2.  Our family business was kosher supermarkets (Crown Supermarket), and to this day, in just about any state I spend a little bit of time in, I find someone who has fond memories of our deli, tuna or rib-eyes.
3.  I went to a Jewish nursery school, and we were in the paper for having six sets of twins in our class. (My brother and I were hands down the cutest.)

If you could lead the Israel Mission with one Jewish person (living or dead) other than one another, who would it be and why?

Abby: On a fun note, I'd pick Adam Sandler.  He's hysterical.
On a serious note, I'd pick David Ben-Gurion, the first Prime Minister of Israel and passionate Zionist. I'd love for him to tour Israel with me and see how all his hard work has paid off.