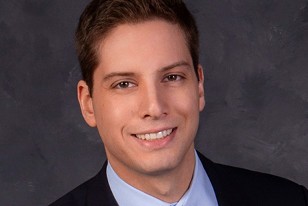 Growing up in Florida, Aaron Ganz attended Jewish day school and overnight camp. Despite the strong Jewish influence in his childhood, a couple of negative experiences left him feeling disconnected from the Jewish community.

“Literally, religion had lost me,” he says. “But I was one of those people who was saved by Birthright Israel. After my trip, I went from being a completely unaffiliated Jew to super involved in Jewish life on campus. It happened overnight.”

After graduating from the University of Chicago in 2012, Aaron received a master’s degree in Management from London Business School, and then worked in Los Angeles and London before settling in Boston in 2018. Soon after, he met with CJP professionals who told him about an upcoming young adult leadership program and a young adult mission to Israel and Spain. Immediately, he signed up for both.

“It was very lucky on the timing,” he says. “For me, CJP was my launchpad into making friends in Boston. It became a huge anchor to the Jewish community and a way to make a lot of social connections very early on. That has stayed with me ever since.”

When he returned from the young adult mission, Aaron jumped into Jewish community through CJP. Over time, he joined the Dewey Stone Kadimah Leadership Development Program, the Ben-Gurion Giving Society Committee, and the Young Adult Engagement Board. He now serves on CJP’s Campaign Cabinet, as Ben-Gurion Co-chair, and Grant Chair for the Young Adult Engagement Board.

His volunteer roles at CJP led Aaron to find his passion for leadership in the broader Jewish community — and specifically, opportunities that use his background in finance to help make a difference. In addition to his work with CJP, he’s part of The Jewish Federations of North America (JFNA) National Young Leadership Cabinet — and sits on the National and Regional boards of Friends of the Israel Defense Forces (FIDF), Strategic Planning Committee of the Jewish National Fund’s (JNF) World Zionist Village, JNF Futures New England Board, and the board of his synagogue, Temple Emanuel of Newton. (As a side note: Aaron, who has a background in opera, sang Hatikvah — the Israeli national anthem — at a recent FIDF gala!)

Aaron says he is drawn to CJP because it has something for everyone.

“CJP is so broad that you can engage in any way you want,” he says. “For me, I feel the most fulfilled and the most aligned with my purpose when being of service of others, whether it is with my time, with my dollars, or with my advocacy. I am so inspired by my experiences and the amazing work that I have seen CJP do, so for me it’s a no-brainer to be part of the mission and contribute to help make CJP’s lofty and necessary goals a reality. Being involved with CJP has also allowed me to have direct impact in many ways which is important to me because I like to experience Judaism from a multifaceted lens.”

For Aaron, that has often come through travel. In addition to the 2018 mission, he went to Nepal in 2020 on a CJP trip to learn about Israel’s global impact and to Ethiopia earlier this year with JNFA to be with new Ethiopian olim (immigrants) as they arrived in Israel.

In April, Aaron and his mother, Nancy — a longtime Lion of Judah — will travel to Israel as part of CJP’s Spark Community Experience. Aaron says Nancy likes to tell the story that when the family visited Israel with a 5-year-old Aaron, he sat on a chair in their hotel room and said, ‘I’m home.’”

“I love Israel — and I love that my mom and I will be going together but separately with different cohorts,” he says. “I know there will be so many opportunities for us to connect and share in special moments. We are so excited — I may have been the first person to sign up for Spark.”

For Aaron, his passion for CJP and Jewish philanthropy comes down to the importance of community.

“More than anything else, the people I have met saying ‘yes’ have been absolutely amazing,” he says. “Everyone has an interesting story. I love how CJP is people-focused and full of heart. It’s not just about the dollars and the campaign, but it’s about fostering experiences, educational opportunities, and a sense of belonging.”

Interested in Spark? Visit cjp.org/spark to learn more about how to join our Jewish community’s journey of connection, discovery, and fun in celebration of Israel’s 75th Independence Day. Young adult subsidy applications will be accepted through January; details can be found here.
Share