In the last week of October, we marked the 30-year anniversary of the Boston-Haifa Connection (BHC), a unique sister city relationship that has helped to forge meaningful connections between our Jewish communities.

Nearly 60 Israelis spent a week learning and envisioning the future with us in Boston. We visited our Jewish partner organizations and congregations, heard from speakers at Brandeis, Harvard, and MIT, and even rolled up our sleeves for hands-on art projects and volunteer service. All of our celebrations and activities explored the theme of responsibility — to our community, to one another, and to our world. We hope you’ll spend a few minutes now browsing through a photo journal of our time together. 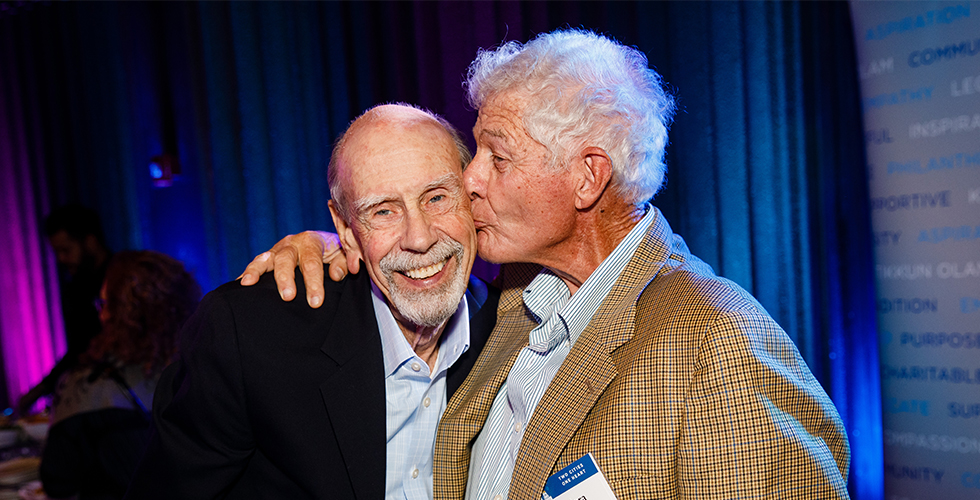 Michael Frieze (left) and Giora Meyuhas (right) first met more than 30 years ago in Cambridge. Little did they know that their friendship would help to launch the Boston-Haifa Connection.​ 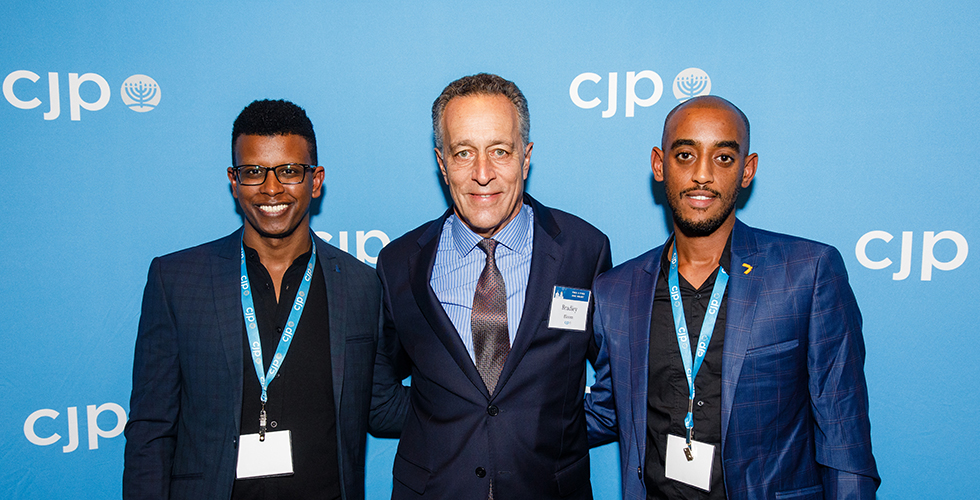 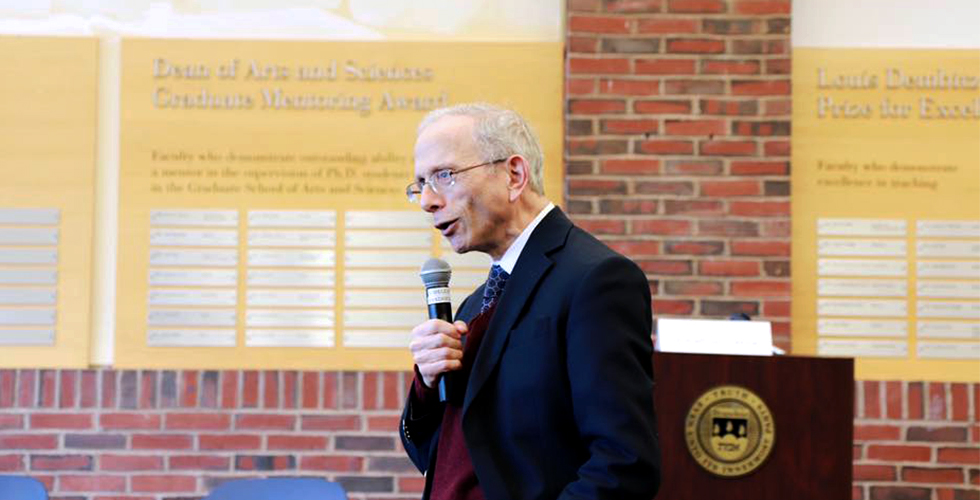 Dr. Jonathan Sarna, Professor of American Jewish History in the Department of Near Eastern and Judaic Studies at Brandeis University, provided a lecture on Jewish identity in America. 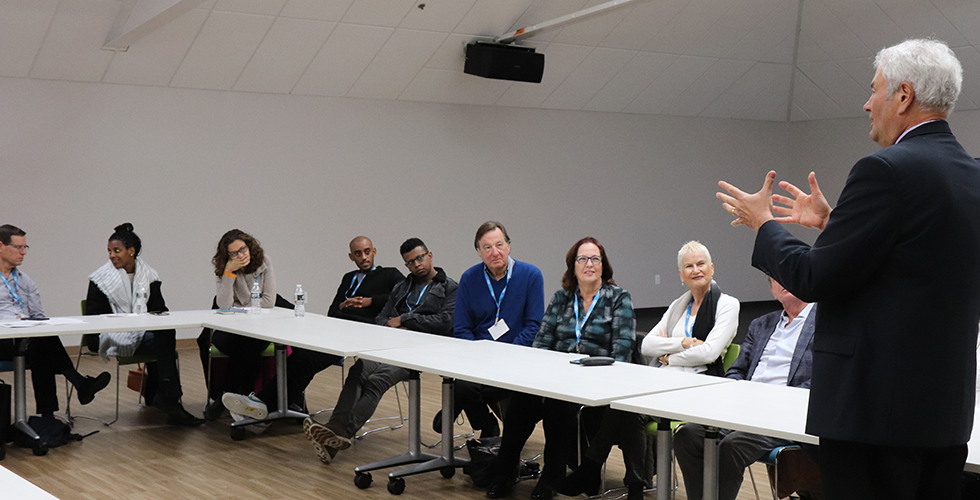 Mark Sokoll, President and CEO of JCC Greater Boston, welcomed the delegation to the newly-renovated campus. Sokoll reinforced JCC’s mission of helping all Jews find a home at JCC, saying: “You can connect in any way that works for you because we're in the Jewish identity construction business. We'll never say you're doing it wrong — we're here to build something special with you." 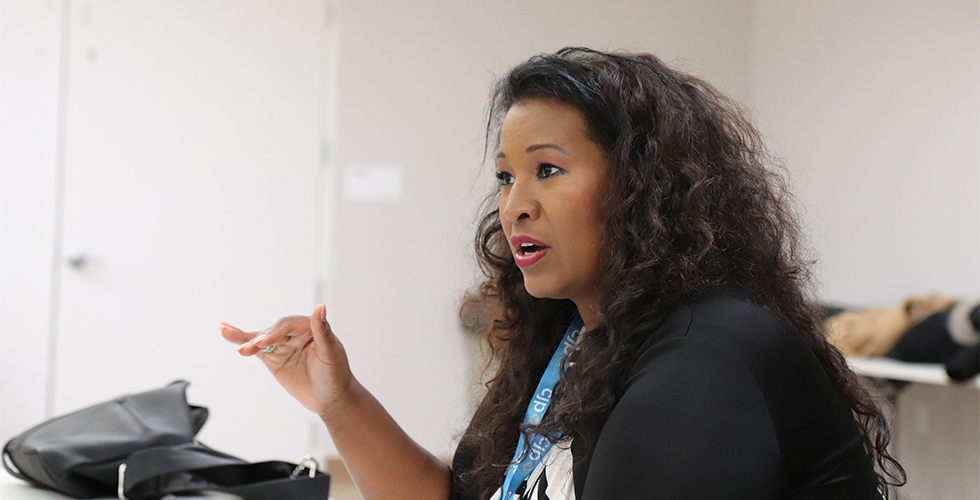 During the visit to JCC, Oshra Friedman reinforced that it’s on everyone to build a strong community — whether in Boston or Haifa. Friedman compared building community to constructing a puzzle, in that each individual piece contributes to the collective. 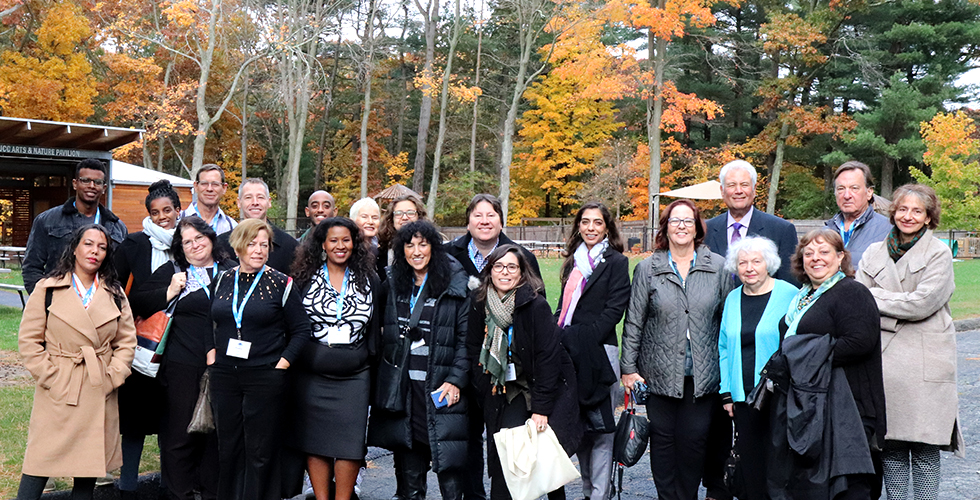 The group takes a photo with Mark Sokoll outside JCC on a fall day. 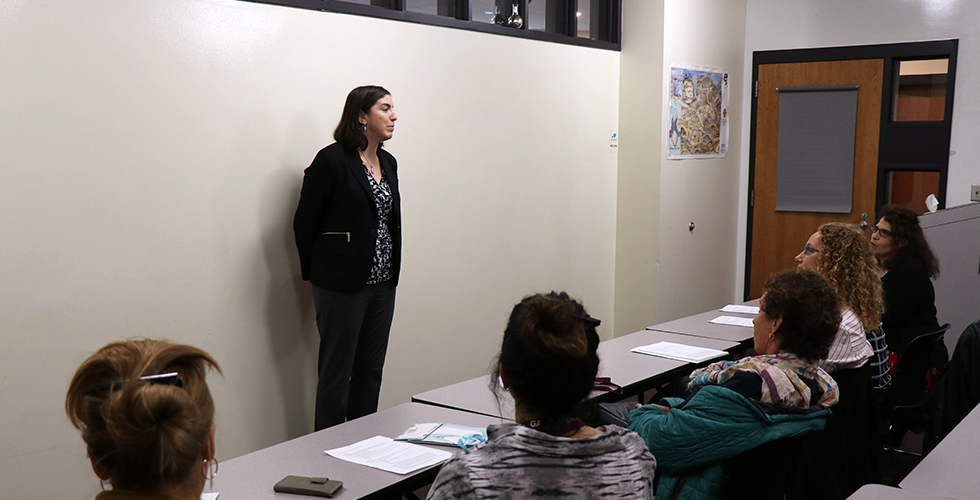 On a visit to Gann Academy, Head of School Dr. Dalia Hochman shared her family ties to Israel — including an aunt who founded a moshav. Dr. Hochman said she can vividly remember being at the moshav (even smelling the smells) and how it has shaped her connection to Israel. 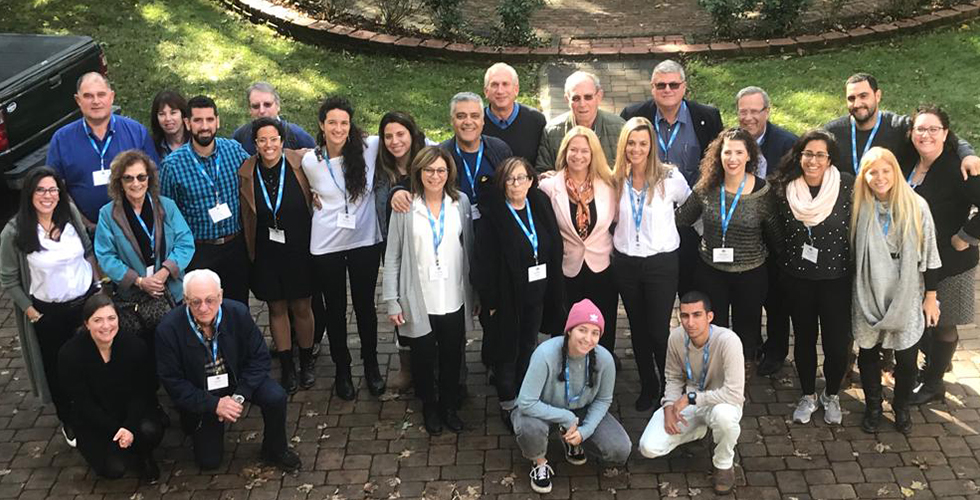 Moishe House Fenway, which opened in September, welcomed the delegation. Sapir Weizman (sixth from left) said that it was always a dream of hers to open an Israeli Moishe House. 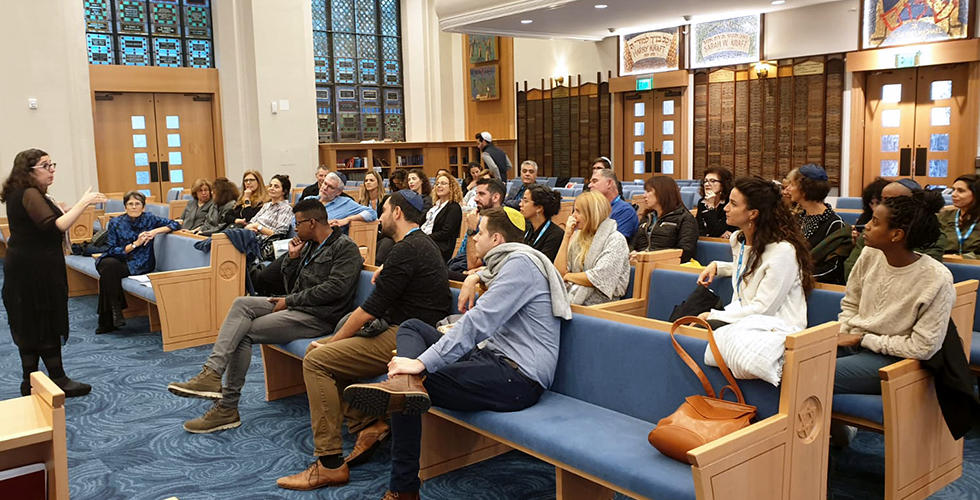 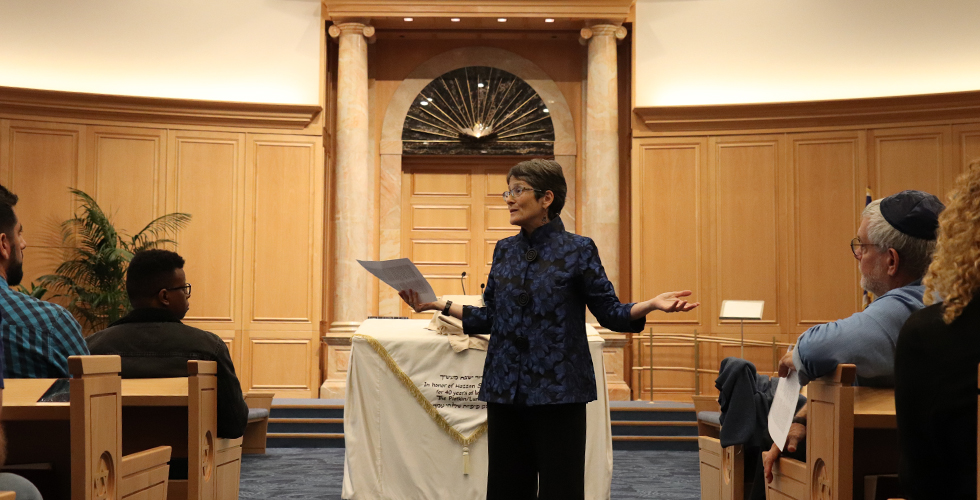 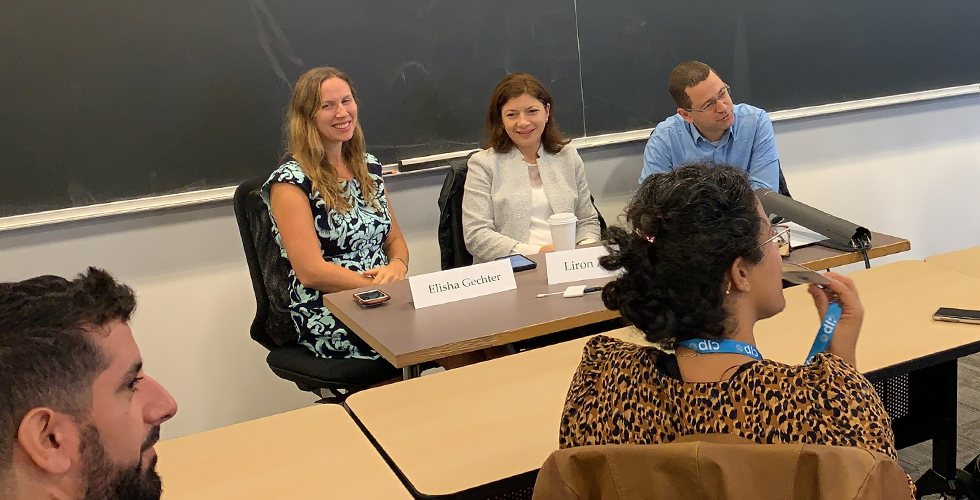 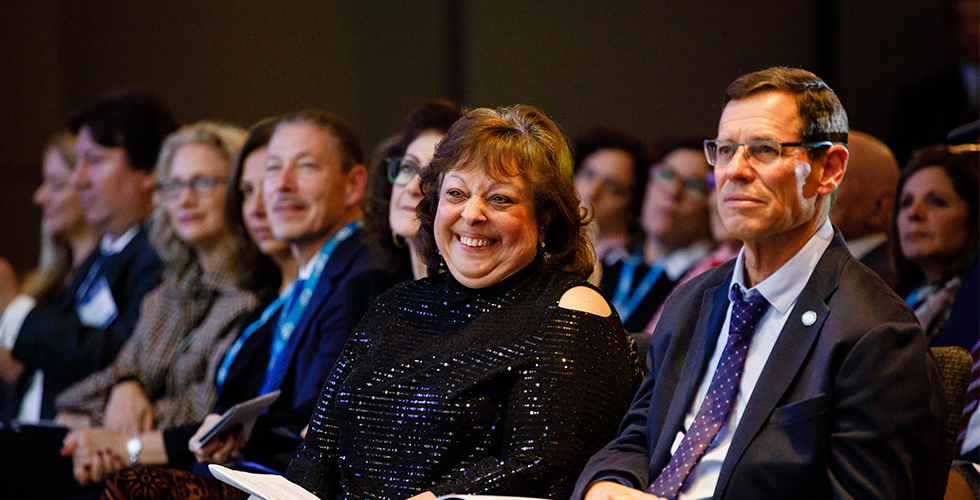 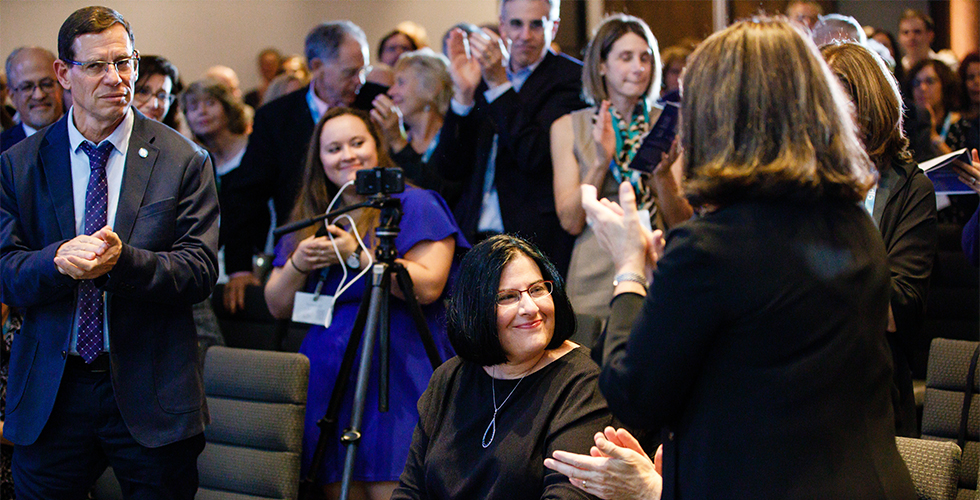 CJP’s Cheryl Aronson (seated, center) was honored for dedicating her career to building relationships between Israeli and American Jews. 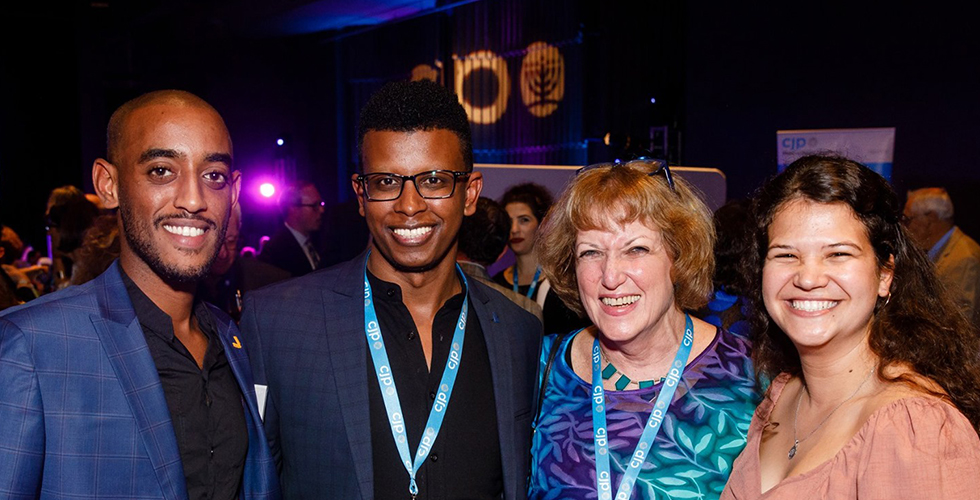 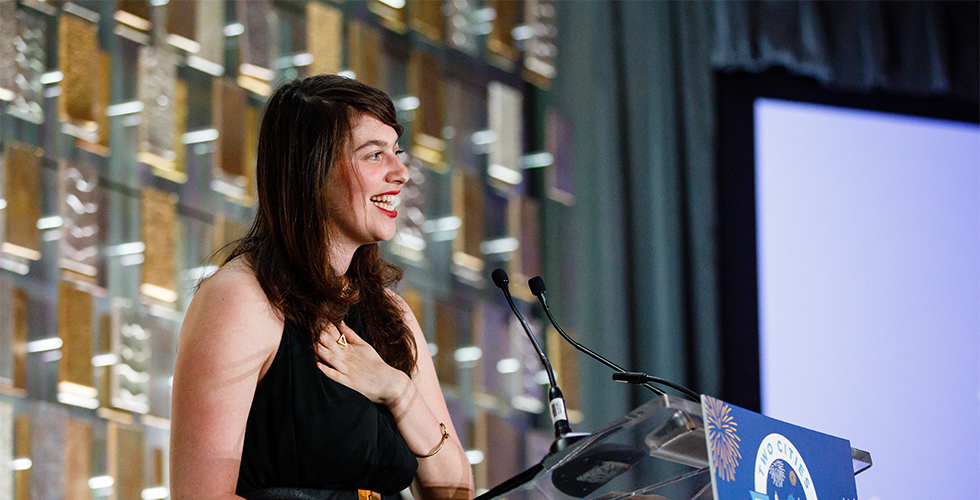 Yael Mark first came to Boston in 2015 as part of the Shinshinim program and spent 10 months living with local families and volunteering with Jewish organizations. She returned this year for the anniversary celebration, saying, “I was once a delegate of Israel in Boston, but now I’m a delegate of Boston in Israel, which is quite amazing. My connection is stronger and deeper than ever.” 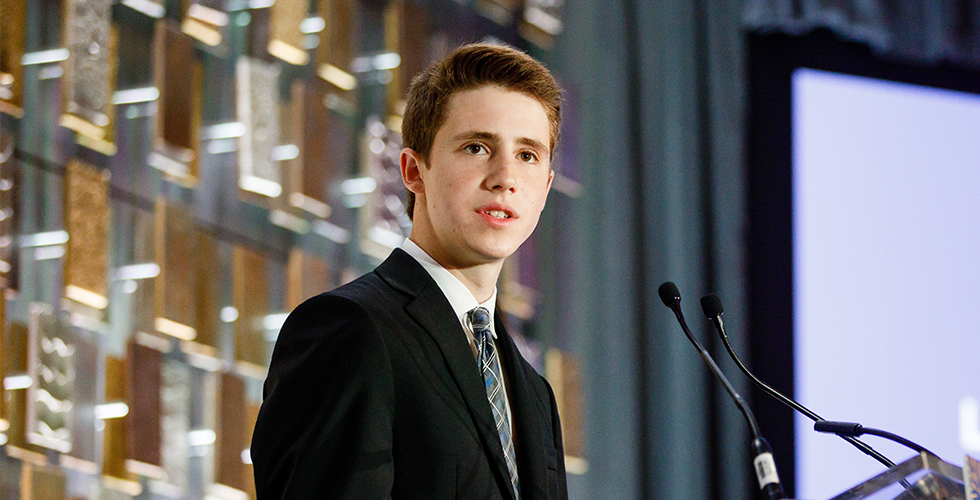 Justin Lewitus is a senior at Lincoln-Sudbury High School who travelled to Israel with the Boston-Haifa Connection and offered his insights at the 30th anniversary celebration. “I noticed that while all my friends are stressing over SAT scores and applying to college, Israeli teens are preparing for their military service. They have ambitions that are bigger than themselves.” 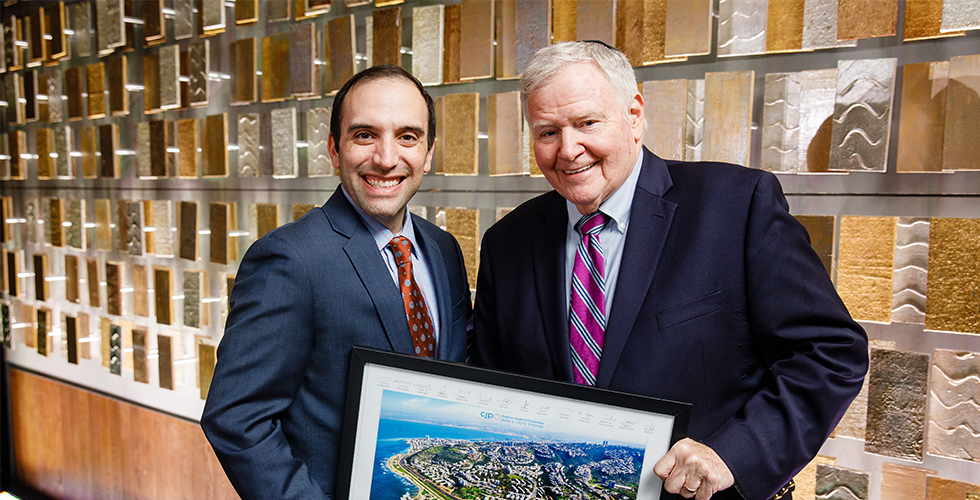 The past and current presidents of CJP are both strong supporters the Boston-Haifa Connection who believe in the power of the person-to-person relationships between the two communities. Rabbi Marc Baker (left) and Barry Shrage (right). 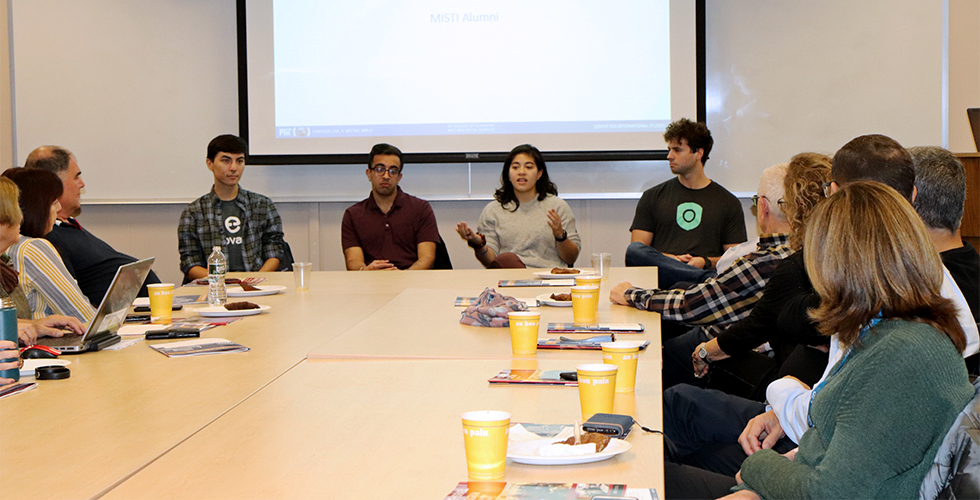 On a visit to MIT, Seiji H. Engelkemier (left, plaid shirt), Arnav Y. Patel, Ariel S. Levy, and Josh Hilke each spoke about their internship experience in Israel. The delegation and students also discussed the perceptions surrounding Israel, living in the Israeli/Palestinian areas, and more. Each student is part of the MIT International Science and Technology Initiatives, or MISTI, which matches students with tailored internship, research, and teaching opportunities abroad. 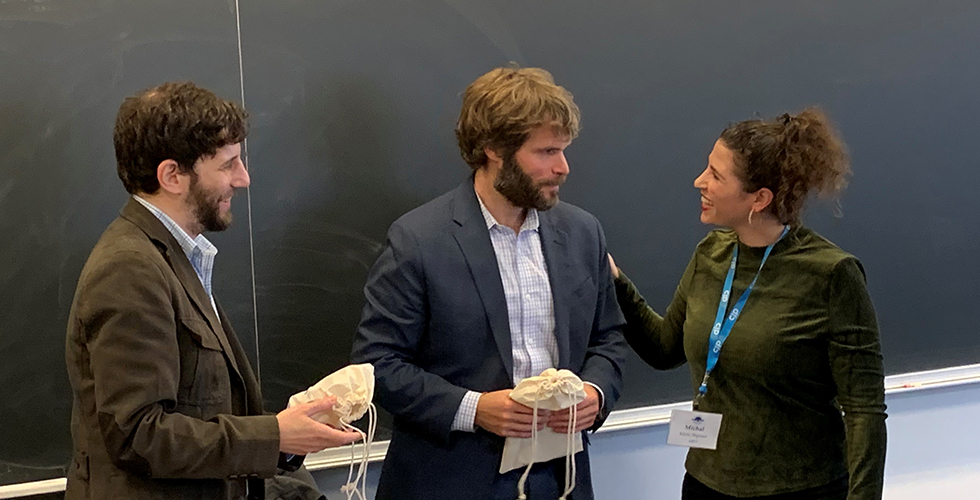 Aaron Agulnek and Eli Cohn-Postell of the Jewish Community Relations Council (JCRC) shared with the group how the American Jewish community thinks about Israel politically, where Israel ranks on the list of priorities for American Jews, and the Israel-Diaspora relationship.

The Israeli delegation puts their artistry into action creating mosaics with the Jewish Arts Collaborative (JArts). 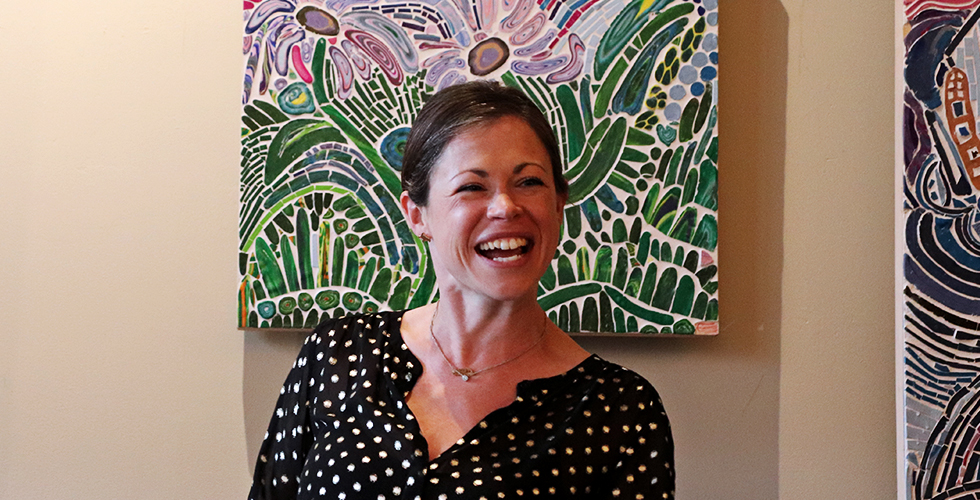 Laura Mandel (above), Executive Director of the Jewish Arts Collaborative, always seems to be smiling when discussing arts and culture. She joined the delegation at SoWa to discuss Jarts’ mission and to convey how art is a dynamic and compelling force in our community. 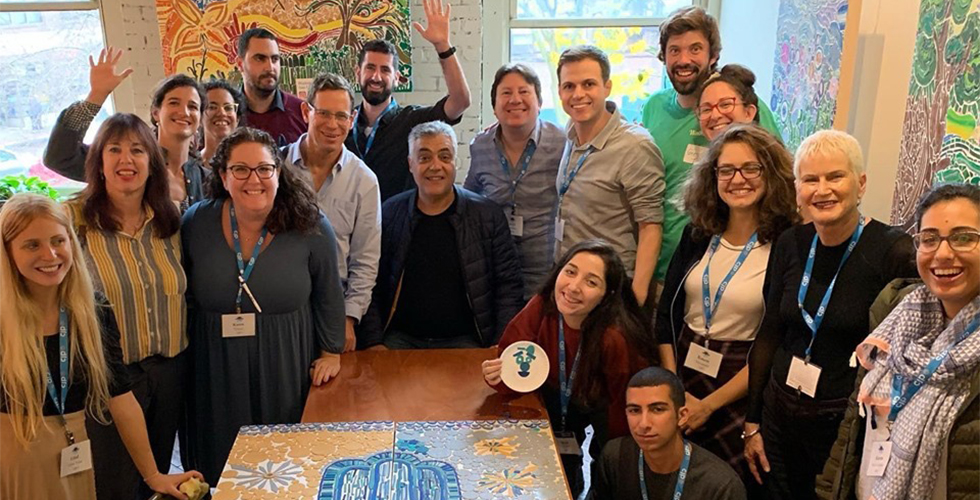 The delegation got creative, collaboratively produced new works of art, including mosaics and graffiti. 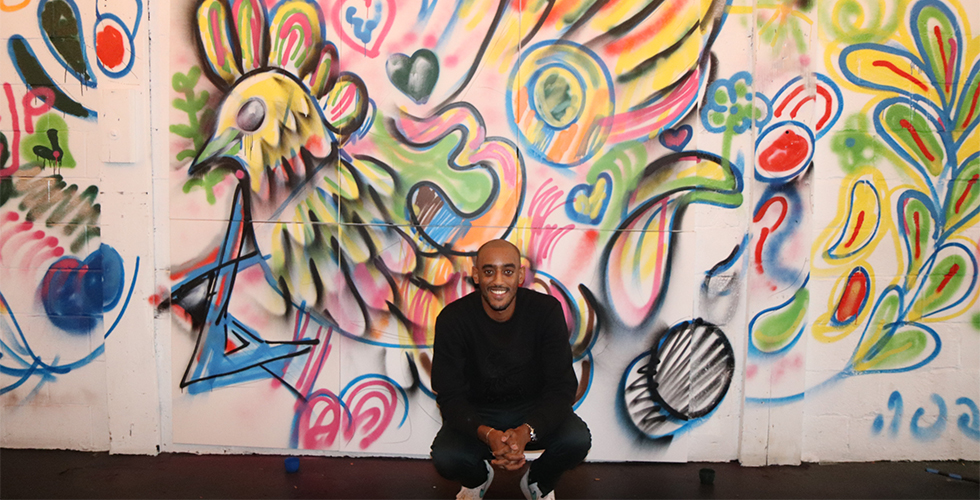 While some participants worked on a mosaic at SoWa, Shimon Wanda, a multi-disciplinary artist from Kiryat Haim in Haifa, led a graffiti tutorial. 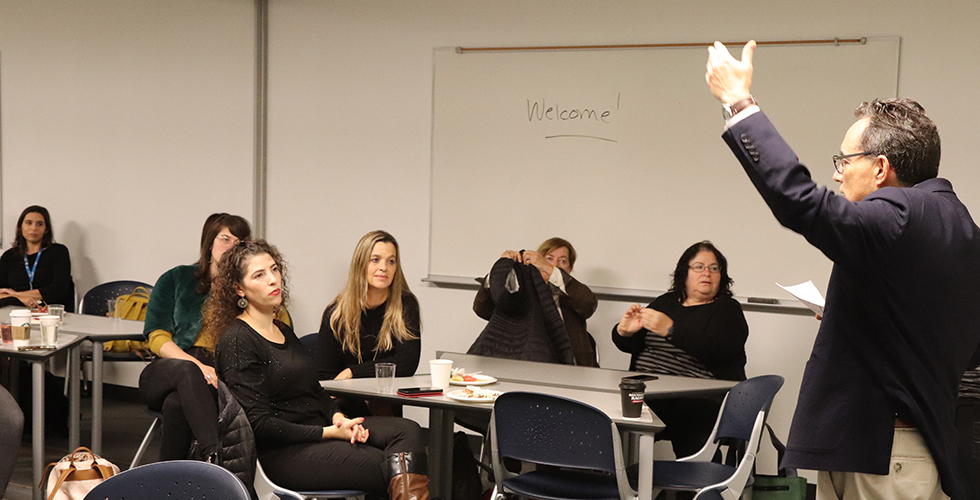 The Haifa delegation meets with Jerry Rubin, President of Jewish Vocational Service (JVS). “Since we [JVS] were founded by CJP more than 80 years ago, we’ve been providing people — first in the Jewish community, and now in the broader community as well — with the tools they need to learn new skills and get great jobs. We are in the business of building the American Dream. We are here so that people can climb the ladder to economic independence.” 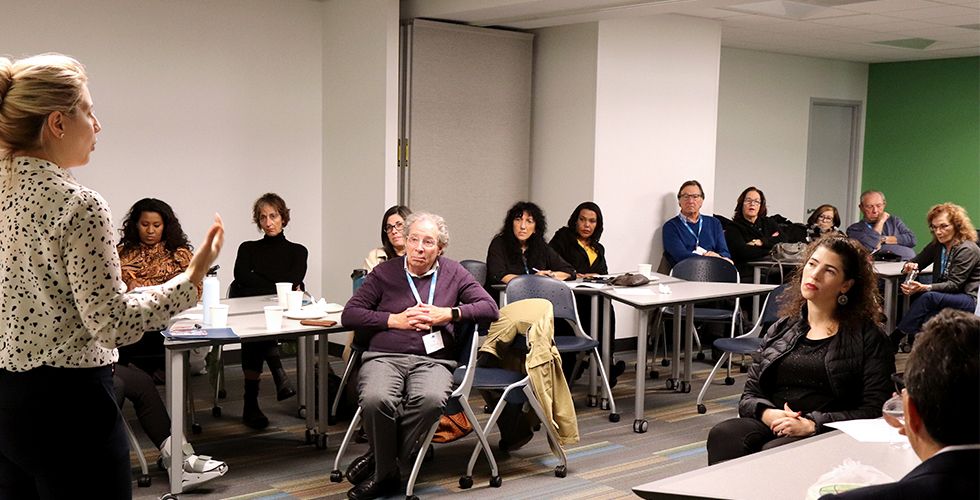 Amanda Hadad (left), Director of Social Justice at CJP, discussed how our Jewish values guide us in addressing systemic issues around homelessness and immigration. 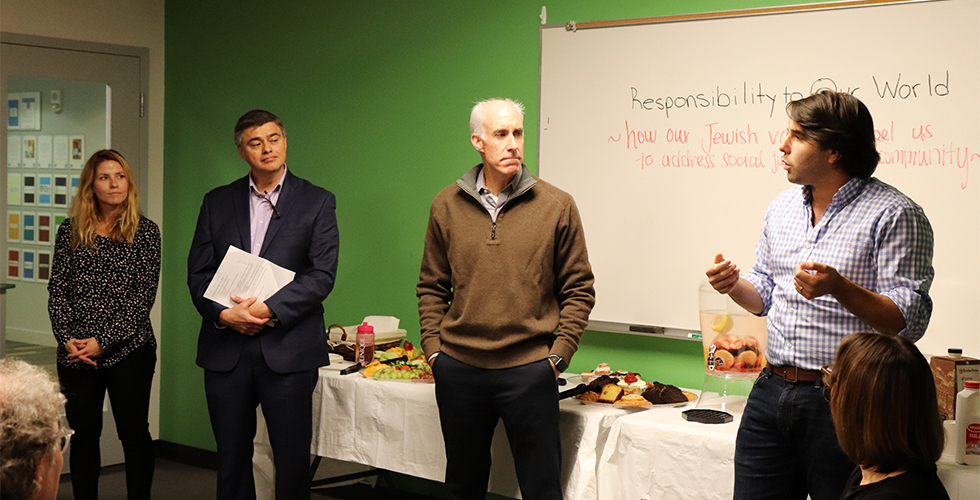 From left to right: Lucia Panichella (Director of Immigrant and Youth Services, JFS of Metrowest), Lino Covarrubias (CEO, JFS of Metrowest), Ed Shapiro (Founder of The Shapiro Foundation), and Larry Tobin (Director of The Shapiro Foundation) in Boston, discuss the Jewish imperative to address social justice not only in Greater Boston, but in the world at large. 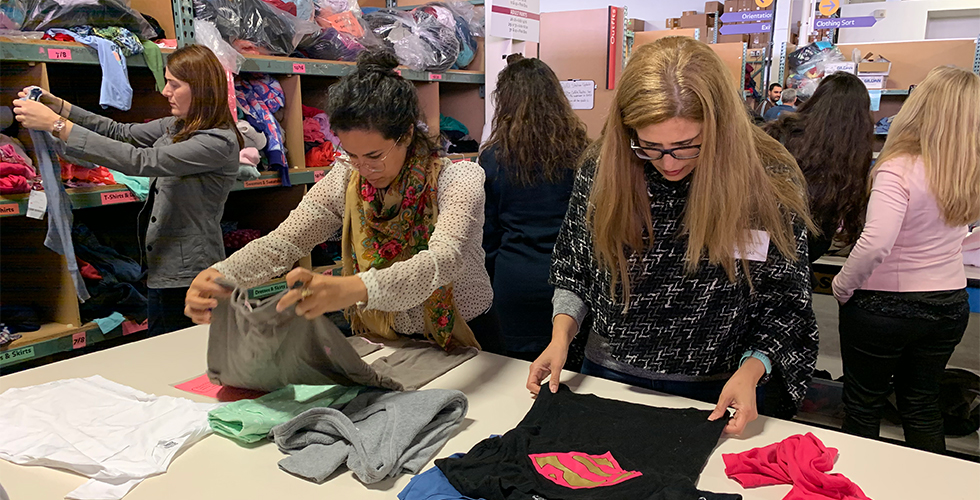 The Haifa delegation also provided hands-on help and community service at Cradles to Crayons, which provides essential supplies for children who are homeless or live in low-income situations. 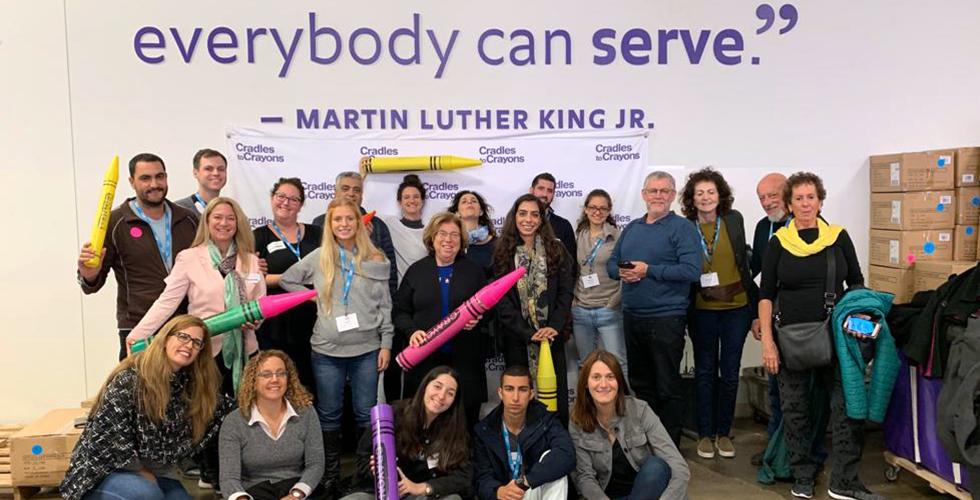 Volunteers take a photo in front the Cradles for Crayons sign photo wall, which reads in full: “Everybody can be great, because everybody can serve.”