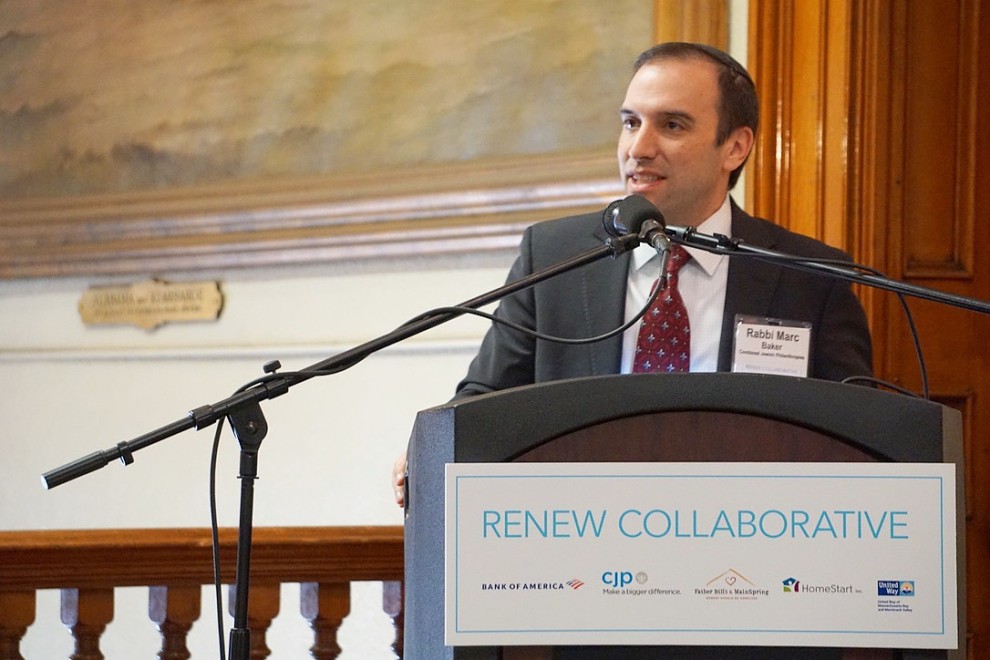 It has been just about a year since I assumed the role of President and CEO of Combined Jewish Philanthropies, and this week I had one of my proudest moments so far. I travelled to Brockton City Hall to join elected officials as well as colleagues from United Way of Massachusetts Bay, Bank of America, HomeStart, and Father Bill’s and MainSpring Homeless Shelter. The event celebrated the launch of a pilot expansion of HomeStart’s eviction prevention efforts (read my remarks here), which CJP has helped to fund as part our Caring and Social Justice (tzedek) work.

HomeStart takes a systemic approach to fighting homeless by preventing evictions before they occur. It’s a win-win-win for families, landlords and local government, all of whom benefit through short- and long-term savings of both human and financial costs. It is a solution that moves from caring for the vulnerable in their immediate moment of need to longer-term, systemic change – exactly how CJP has approached our most recent and ongoing anti-poverty work through the Anti-Poverty Initiative.

Participating in this pilot expansion gives us an opportunity to learn first-hand about a critical issue that does not discriminate and affects all communities, including ours. It puts us in partnership with philanthropic and civic partners beyond the Jewish community and gives us a voice at the table with them.

Perhaps most importantly, it enables us to play our small part in taking responsibility for human beings and the Greater Boston communities beyond just “our own.” Which is why it was such a privilege for me to speak at the official launch event about our particular Jewish lens on universal moral and spiritual obligations, and what motivates our community to support this work.

Looking out at the City Hall filled mostly with members of local city government and colleagues from outside the Jewish world, I thought of one of the themes that emerged repeatedly throughout my 360/Five Listening Tour this year. People from every generation, especially our younger generation, have shared with me how proud they are that CJP and our Greater Boston Jewish community are engaged with pressing social issues facing our broader society and the world.

Yes, we have an urgent need, on which we will double-down, to invest in our own institutions, the well-being of our community and the vibrancy of Jewish life to ensure that we survive and thrive for generations to come. And, we are no longer living on the margins of society concerned only with our own survival. We are part of a local and global, interconnected world for which we share collective responsibility.

Or, as Rabbi Jonathan Sacks describes so beautifully in his final message before stepping down as Chief Rabbi of the United Hebrew Congregations of the Commonwealth (United Kingdom):

The challenge of our time is to go out to Jews with a Judaism that relates to the world – their world – with intellectual integrity, ethical passion and spiritual power, a Judaism neither intimidated by the world nor dismissive of it, a Judaism fully expressive of the broad horizons and high ideals of our heritage. . . Judaism is an essential voice in the human conversation.

It is also why just created a new Fund for Detained Children to give ourselves some moral agency in the face of the heartbreaking humanitarian crisis occurring on our southern border right now. I have been deeply moved by so many of you who have reached out over these past days asking not only “what can we do?” but “how can we take action, now, to live out our Jewish values as members of our Jewish community?”

This is what it means to be a Jewish community engaged with the world, and I am so proud to be part of this community with all of you.