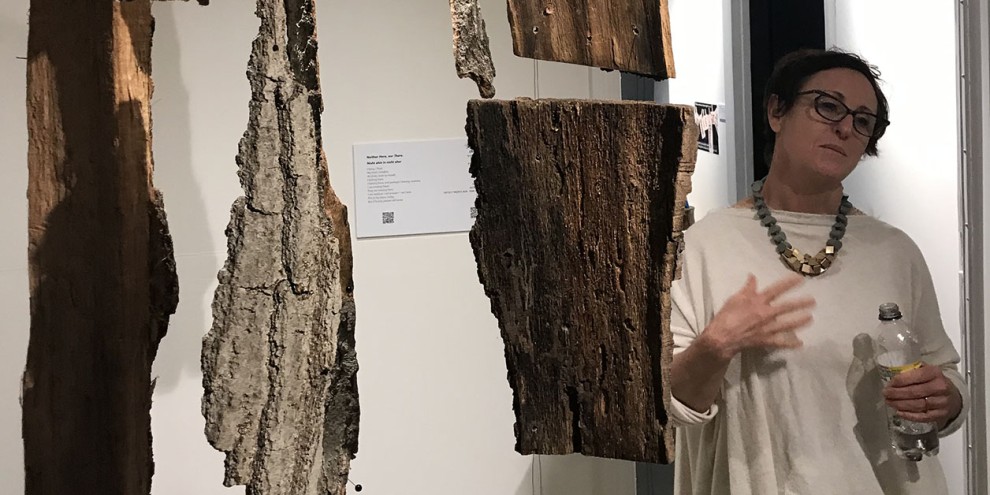 From the moment you walk through the door and find yourself under a chuppah (Jewish wedding canopy) made of patched-together American and Israeli symbols, the entire exhibit invites you into the artist’s worlds and her identities as a South African immigrant to Israel who now lives in Boston.

There is paradox and depth to every piece, beginning with the title of the first piece on display, I now declare you: one.” The metaphor of the chuppah is a perfect one; while a couple does come together as one, they remain two distinct individuals — two unique souls forging a shared identity and shared journey. On so many levels, this has always represented the identity of the wandering Jew, the timeless immigrant, someone who is constantly integrating cultures and stories, but never quite with a place for herself.

The exhibit explores the notion of home as both a geographic and existential concept. What defines home for each of us? The food we eat? The language we use? The currency we exchange? The symbols that surround us? It invites the viewers to ask ourselves these questions and to reflect on our own identities. What place(s) am I “of”? If more than one, how do they or do they not coexist inside of me?

In addition to the powerful existential themes, the media in “Of Two Places” are very much the message. Hebrew and Israeli symbols are in conversation with American cultural motifs, all woven together with deeply Jewish threads, such as traditional Jewish ritual objects and ideas. The artist’s personal story of immigrating twice animates her passionate social critique and call for justice, both of which she describes as defining features of her Jewish identity.

I noticed and appreciated the reversal of fortune that her “privileged” immigration experiences represented, given the Jewish People’s history of flight, expulsion, and geographic rootlessness. Especially at what feels like a precarious moment for our blessed Jewish American experience, seeing a golden suitcase under barbed wire mounted on a fading American flag was jarring.

I left the exhibit with so many questions, inspired by the power of art as an expression of and vehicle for exploring our identities as Jews and human beings. For so many members of our community, art and culture are the media, the texts through which their voices enter timeless Jewish conversation.

Last year, CJP gathered a group to discuss arts and culture in Greater Boston as part of my broader listening tour. During this discussion, we heard similar experiences “of two places.” Too many members of our community have Jewish identities and/or “artist” identities that could, but do not yet, mutually reinforce and deepen one another.

Thanks to organizations like JArts in Boston and others here and around the world, this is changing. CJP is excited explore new avenues of Jewish engagement and expression through arts and culture, which I believe will powerfully interact with other forms of Jewish connection, such as Jewish learning and practice, caring and social justice, and Israel and global Jewish citizenship. Caron Tabb’s exhibit is such a beautiful illustration of interconnectedness of these different lenses on Jewish life.

As we begin the Torah anew this Shabbat and reread the stories of Creation, we remind ourselves that as human beings created in the Divine Image, we are endowed with our own creative capacities. Finding ways to activate and express our creativity can add meaning and purpose to our lives, renew and revitalize the beauty of ancient culture and tradition, and inspire and mobilize positive social change. I am grateful for exhibits like “Of Two Places” and eager to see the ways that the vibrancy of Jewish arts and culture will contribute even more to the vitality of our Jewish community.