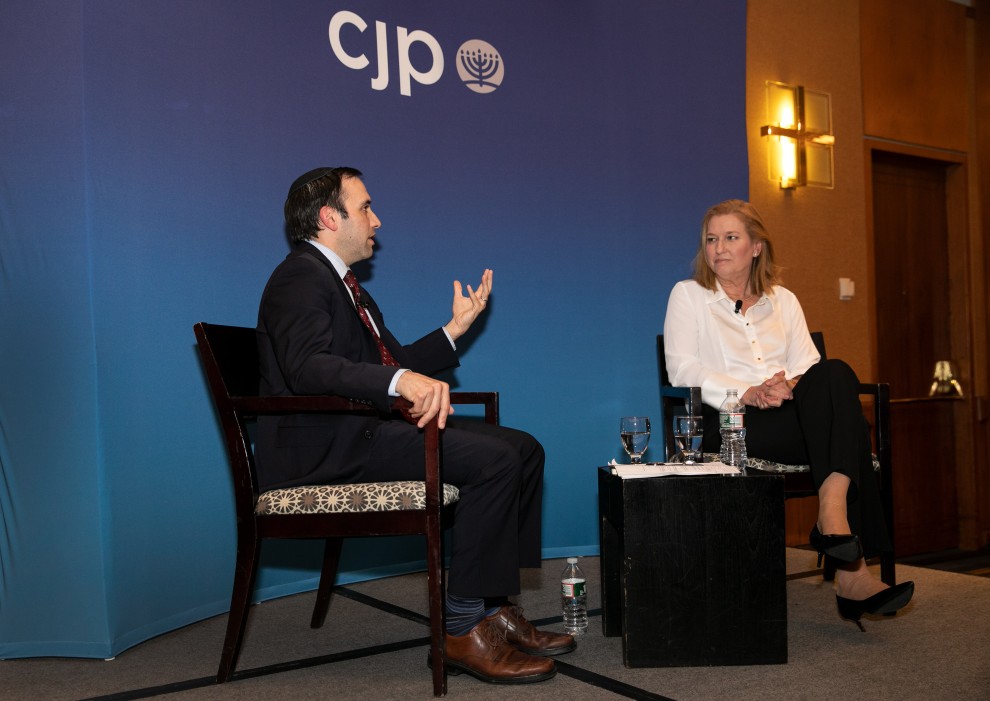 Earlier this week, we celebrated the 71st anniversary of official birth of the State of Israel, the day on which Israel’s first Prime Minister, David Ben-Gurion, read aloud the Declaration of Independence for the world and the Jewish People to hear. According to the Declaration, Israel would be the nation state of the Jewish People that upholds full equality for all its citizens – a Jewish, democratic state in our historic homeland.

Last night, I had the privilege of engaging in a public conversation with former Israeli Knesset member Tzipi Livni about her personal journey, and about Israel’s past and future, its character, relationship with North American Jewry, and more. As my colleague, Aviva Klompas, described in her opening remarks, since Israel’s founding, it has been in partnership with global Jewry to promote the safety and welfare of Jews wherever they are in the world and to contribute meaningfully to the broader world as a “nation among nations.”

This partnership rests on a shared history, but it does not stop there. For the first time in millennia, the Jewish People held their future in their own hands. In Aviva’s words, “our future (will be) built, not inherited.”

Her remarks and this anniversary remind me of the teachings of Rabbi David Hartman and his extraordinary work “A Living Covenant,” in which he describes the spirit of covenant in Judaism and its significance for Israel and the modern world. He writes,

For a long time in history, we did not have to deal with (political questions) . . . since we were a powerless community. . . As a result of the rebirth of Israel . . . religious and non-religious Jews have a new sense of power and belonging that they have rarely felt through their long sojourn in the diaspora. . . For the covenant to be renewed in its full power and vitality, Jews must be willing to face the serious moral and religious problems that arise when they seek to participate fully in modern society. . . The birth (of Israel) teaches all of Jewry that being rooted in a particular history and tradition need not be antithetical to involvement and concern with the larger issues affecting the human world.

For Hartman, Israel represents the Jewish People’s return to history and its reclaiming of human agency over our own destiny. This agency comes with great moral responsibility, which makes Israel a laboratory for the living out of Jewish values and aspirations in a way that we cannot fully realize as a politically powerless minority in the diaspora. As with every people, every nation, and every religion, this is a profoundly imperfect endeavor which therefore demands constant vigilance and moral self-critique.

This self-critique is something that Tzipi Livni spoke about last night, challenging us to stay in conversation “among the family” about the character of Israel today and our vision for its future. She shared openly and honestly both her concern and inspiration, and her fears and hopes for the future. I, in turn, shared with her some of the themes that I have heard from our community during The 360/Five listening tour, including the questions, concerns, hopes, and frustrations about our relationship with Israel. During the event last night, we explored these questions together:

As I think about notions of global Jewish citizenship and our shared future, I believe that the medium of this conversation – respectful discussion from different viewpoints – was also the message. We need more opportunities and platforms for authentic dialogue between Israelis and Americans to deepen our understanding of one another, to clarify shared values and commitments, and to act as moral agents of our own destiny who take our collective future into our own hands.

May the anniversary of Israel’s independence remind us of this sacred responsibility and re-inspire us to stay committed to it and to one another.