I returned this morning from four intense days in Israel as part of CJP’s Solidarity Mission. I traveled with a diverse group of CJP leaders and volunteers whose passion, curiosity, and love of Israel inspired me. I felt similarly to many others who just needed to get back here the first chance we got.

In Israel, we reconnected with familiar places and with friends, colleagues, and CJP partners. We learned firsthand how the multiple crises and challenges Israel is facing have affected individuals and different segments of Israeli society. We saw and felt the depth of relationships that our Boston community has built and the impact we have created over the decades.

On our last day in Israel, we visited two communities on the Gaza border to learn about their experience during the conflict this past May. We listened to their stories about the toll that the constant threat of violence has on families and children who live in this area. 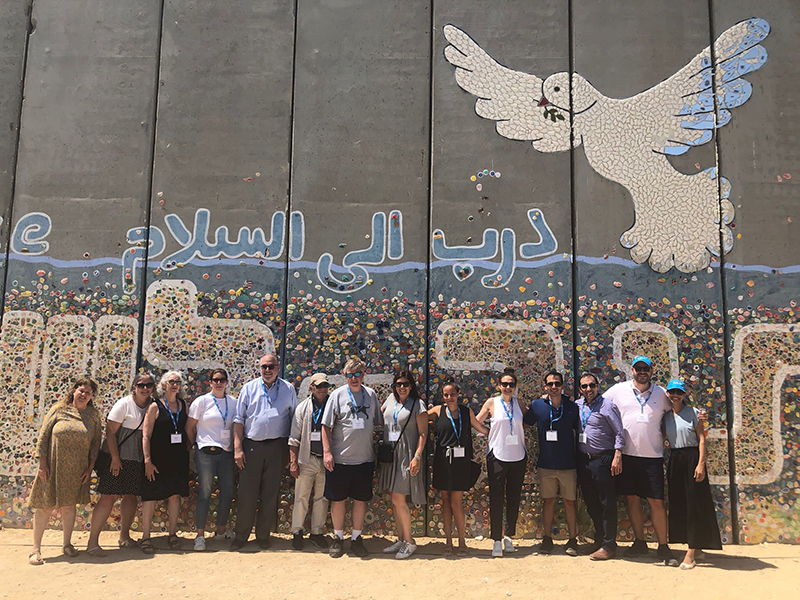 I was particularly moved by our meeting with Tali Levenson from the Israel Trauma Coalition (ITC), a long-time partner of CJP. Many of you may remember when ITC came to Boston immediately after the 2013 Marathon bombing to help our community in the aftermath of trauma. She described how ITC offers immediate psycho-social-emotional support and builds “Resilience Centers” in communities in Israel and around the world facing crises related to terrorism and violence.

Tali described why they chose the term Resilience Center instead of Trauma Center.

“Some people describe resilience as ‘bouncing back’ from a trauma,’” she said. “I prefer to think of it as ‘bouncing forward.’ You will never be the same person you were before the crisis, but you will cope, and you will move forward.”

“Resilience” could have been the name of our whole mission, for it was perhaps the most poignant theme throughout. We met wounded Israeli soldiers who have learned that being vulnerable — learning to heal themselves and one another — is a new form of heroism. We met Jewish and Muslim leaders who are working on the ground, day after day, to build a Jewish and democratic state that is both a homeland for the Jewish People and a country where all its inhabitants live with dignity, equality, and opportunity.

The people we met did not sugarcoat the challenges Israeli society is facing. They talked candidly about how families and communities have been affected by COVID-19, years of political instability, and the violence and conflict of this past May. They acknowledged the setbacks, the pain, and the trauma; yet, precisely as Tali described, they are choosing to rebuild and move forward.

This Sunday is Tisha B’Av, the saddest day on the Jewish calendar, commemorating the destructions of the First and Second Temples in Jerusalem, as well as other tragedies and calamities that have befallen the Jewish People throughout our history. It is a day of fasting, mourning, and remembering.

Some wonder whether it is appropriate to continue the practice of mourning for the destruction of Jerusalem and the expulsion from the Land of Israel when, after 2,000 years, we have finally returned to our homeland and have a modern Jewish State. I see the process of remembering the ways we've suffered when we were powerless as one of the ways to ensure that we use our power and agency today with wisdom and compassion.

In addition, Tisha B'av reminds us that the Jewish People have survived and thrived for thousands of years because resilience is one of our calling cards. Individually and collectively, we have experienced the traumas of expulsion, displacement, persecution, and genocide. We remember and mourn in order to be as intentional as possible about bringing our past, our grief, and our pain with us. Ultimately, that is how we heal, grow, and move forward.

That’s what we are doing on Tisha B’Av, and that is what we experienced in Israel this week.