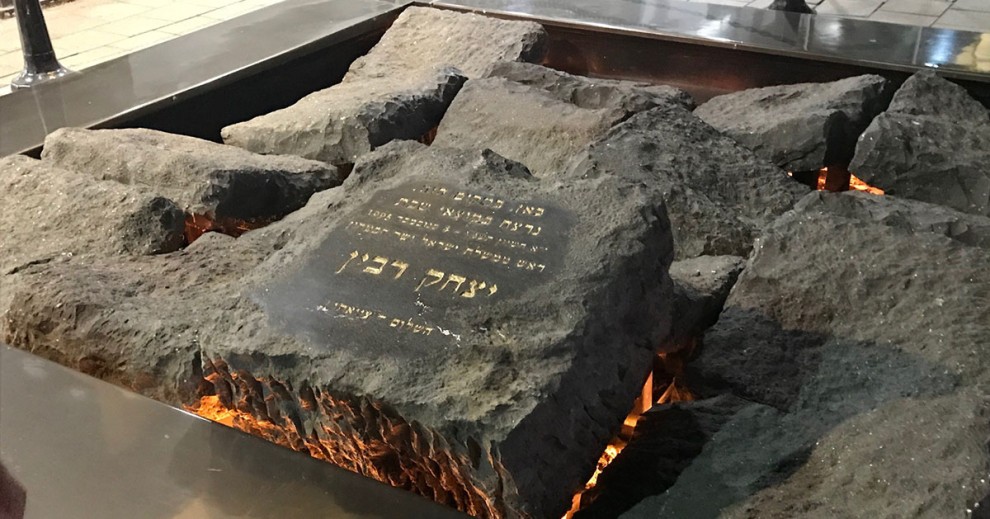 I just returned from an intense and inspiring week in Israel with a small but mighty group of talented young professionals from our community.

In spite of the rockets from Gaza and the continued paralysis of Israel’s political process, we saw firsthand the vibrancy and diversity, the resiliency and the ingenuity, that built and continues to build a dynamic, modern, Jewish democratic state on a foundation of thousands of years of Jewish history.

We did not shy away from the complexities and imperfections that pervade any society striving to live out its ideals in the real world.

On our last night, we visited the exact spot where Prime Minister Yitzhak Rabin was murdered in 1996. The memorial is a sobering reminder that when differences and disagreements morph into toxic polarization and demonization of those with whom we disagree, the consequences can be existential, even fatal. We know this through our history as both Jews and Americans. The fragility of democracies are part of our history and we can feel it today in Israel, the world, and our own country.

This was a challenging week for both America and Israel. Regardless of our politics, our hearts should break when Presidents and Prime Ministers — who should be the torchbearers of our highest ideals and aspirations — face impeachment and indictment.

For many of us, these legal and political processes reinforce the sense of the polarization and divisiveness that plague us right now, deepening our frustrations with “the other side.” Even writing about this at all comes with the risk of being labeled “politically divisive,” though it is not my intent.

Instead, I want to share the hope I felt when a young colleague forwarded me excerpts from the testimony of Alexander Vindman because it made her so proud to be Jewish and American. She also described how proud she is to work at an organization that was a leader in supporting the emigration and resettlement of Soviet Jews, both here in Boston and beyond.

Alexander’s story is so uniquely American. A Soviet Jewish refugee and Iraq War veteran, he chose to spend his life serving in the U.S. military out of gratitude to this country, and put his testimony in the context of his family’s story and his relationship with his father:

"When my father was 47 years old he left behind his entire life and the only home he had ever known to start over in the United States so that his three sons could have better, safer lives…

My simple act of appearing here today… would not be tolerated in many places around the world. In Russia, my act of expressing my concerns to the chain of command in an official and private way… would surely cost me my life. I am grateful for my father’s brave act of hope 40 years ago and for the privilege of being an American citizen and public servant, where I can live free of fear for mine and my family’s safety.

Dad, my sitting here today, in the U.S. Capitol talking to our elected officials, is proof that you made the right decision 40 years ago to leave the Soviet Union and come here to the United States of America in search of a better life for our family. Do not worry, I will be fine for telling the truth."

In these times, it can be difficult to see or feel beyond our own politics, perspectives, and pain, especially when political tensions are so high. Yet Vindman’s very act of testifying bears witness to both American and Jewish values and ideals.

We have inherited traditions that are revolutionary in their rejection of the absolute power of any human being. In both, no one is above the law, because leaders are meant to serve the people they lead and the ideals for which they strive. The U.S. Constitution enshrines a separation of powers; Jewish tradition requires the king to wear a Torah (our “constitution”) around his neck.

At a time when the fragility of Israel’s and America’s democracies can feel so acute, it is easy to take for granted notions like freedom of expression and the rule of law. So, as we prepare for Thanksgiving let’s remember how blessed we are to be living in these places at this time in history, and to be part of two extraordinary and imperfect countries.