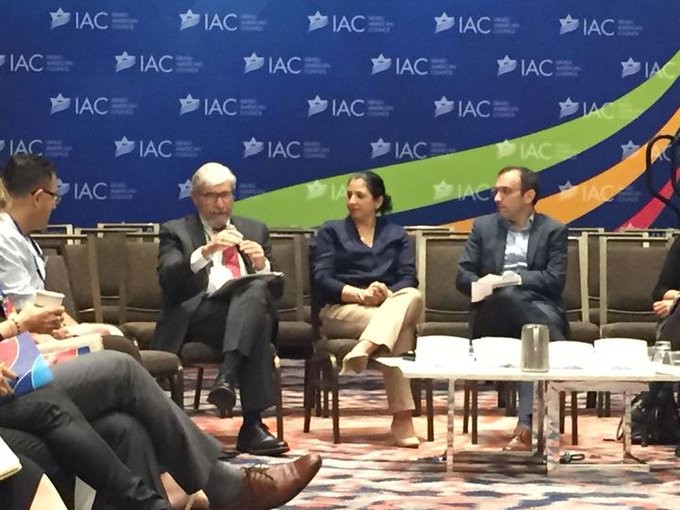 Last night, I was surrounded by more than 4,000 people at the opening plenary of the national conference of the Israeli American Council (IAC). A relatively new organization, IAC is a phenomenon in the landscape and history of American Jewish life and the Jewish people. IAC Boston is one of the strongest local branches of this national organization and a tremendous partner for CJP in our efforts to engage thousands of Israeli Americans and our broader Jewish community.

Not long ago, Israelis who moved out of the country were looked down upon. When they moved to a place like Boston, the assumption was “I’m going back in a year or two.” Now, there is a thriving, modern Israeli diaspora, with hundreds of thousands of Israelis living in America, and tens of thousands right here in the Greater Boston area. This is their home now — hence the term Israeli American.

Not long ago, many of these Israelis felt no need to participate in the American Jewish community, and certainly not in our traditional institutions such as Federations, synagogues, or day schools. In Israel, many aspects of Jewish identity happen organically and are taken for granted (the Jewish calendar and Hebrew language, for example). Now, many of these Israeli Americans are asking themselves: How will we transmit Jewish identity, love of Israel, and “Israeliness” to our children?

In the words of my predecessor, Barry Shrage, IAC has given the Israeli American community a powerful voice, with which they can organize themselves, create community, participate in, and influence the character and future of American Jewish life. What an opportunity and blessing for all of us!

At a time when we need to innovate and adapt both traditional and new models of Jewish life and Jewish community, IAC is a quintessentially 21st-century organization — grassroots, people-centered, culturally vibrant, and, in true Israeli fashion, fun. IAC Boston’s annual “gala” is a Purim costume party, and last night’s opening plenary concluded with a music concert that had thousands of people singing and dancing in their seats.

IAC is also contributing to new conversations about the relationship between Israeli Americans and the broader American Jewish community, and about our collective relationship with Israel. On the one hand, a constant theme throughout this conference is: We are one people, one family. There is more that unites us than divides us. For instance, last year, CJP and IAC co-hosted Koolulam, an interactive concert that had Israeli and Boston-area Jewish communities singing together in a meaningful and unifying experience.

On the other hand, there is real recognition that this is a critical moment in history, and we need to deepen our relationships with and understanding of the differences both within and between American and Israeli societies.

Yesterday, I also participated in a special gathering hosted by the Ruderman Family Foundation about contemporary and historical perspectives and paradigms for understanding Jewish-American-Israeli relations. During one of the panels, Brandeis University Professor Jonathan Sarna told us that we need to learn from our history because, in the famous words of philosopher George Santayana, “Those who cannot remember the past are condemned to repeat it.” Yes, and there are other reasons why we need to appreciate the history of the moment in which we find ourselves right now.

This charge to remember our history reminded me of a powerful moment in this week’s Torah portion.

Coincidentally, we read about Jacob leaving the Land of Israel. As he prepares to cross the border, he falls asleep, dreams of the famous ladder, and receives a blessing from God: “I am the God of your father and grandfather... just as I blessed them, I will bless you and your descendants... I will be with you when you leave this land and when you return to it...”

Precisely at a moment of transition and change in Jacob’s life — both geographic and existential – God charges him to remember where he comes from and to imagine his future. It is when he leaves the Land that he takes his place in the great chain of his family’s story and his People’s history. He wakes up and says, “God was in this place and I did not even know it.” Perhaps he needed to leave, to journey, to change — scary and uncertain as this was — in order to see and appreciate himself.

Sometimes it requires leaving, changing locations, demographic shifts, and existential challenges to open our eyes to the power of the moment we are in, to the grandeur of the story of which we are blessed to be part and for which we are now responsible. Who would have thought that these Israelis would be here in America, connecting so deeply with one another, feeling so proud to be Jewish and such love for Israel and the Jewish People, and changing the face of the American Jewish community?

You can feel it at this conference. This is a critical moment for American Jews, Israelis, and for the growing, dynamic communities of Israeli Americans. How will we raise our voices, come together across our differences, learn from our past, and write the story of our future, together?